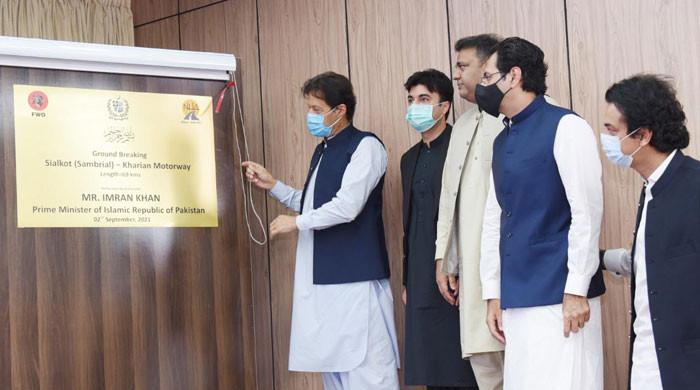 Addressing the groundbreaking ceremony, Prime Minister Imran Khan said that he would ensure that the Sialkot-Kharian Motorway would be constructed through a public-private partnership, adding that it would save the Public Development Fund. So that it can be spent on education and health.

The Prime Minister said that 2.7 million cars were traveling on the Swat Motorway during Eid. “Imagine the benefits that come with it. [to local industries]. And whenever the traffic. [of vehicles increases on such projects] Then comes private investment. “

Criticizing the PML-N leadership, the PM said that the former rulers had illegally bought flats in London from commissioners for road construction projects.

He further said that Pakistan needs to create wealth to repay its debts, adding that industrialization in the country must be increased.

The Prime Minister asked Fawad Chaudhry to highlight that “we are building three times more roads than the previous government”.

“And we’re making them at a lower cost,” he said. “Because these roads are not being used by the commission to buy flats in London.”

Addressing the stakeholders present at the event, the Prime Minister urged them to personally inform them whenever they face obstacles in construction and other projects.

“Our first priority is to ensure ease of doing business,” he explained.

Prime Minister Imran Khan said that Pakistan has a large population of youth which should be used for its own benefit. “We can turn our large population into a benefit for us,” he said. “Only if we act wisely.”

He further said that if the northern part of Gilgit-Baltistan is connected with other areas, it would boost tourism in Pakistan to an unprecedented level.

“More tourists in the country will mean more influx of dollars into Pakistan,” he said. “This, in turn, will improve the exchange rate.”