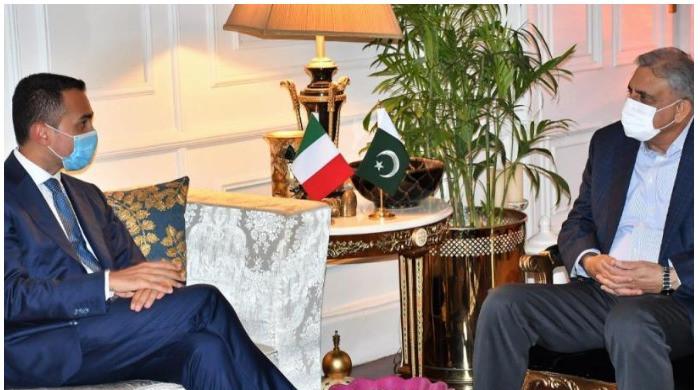 Issues of mutual interest, regional security, the deteriorating situation in Afghanistan and humanitarian assistance to Afghanistan were discussed during the meeting.

The Army Chief said that Pakistan values ​​its relations with Italy and is keen to enhance mutually beneficial multi-domain relations based on common interests.

Mayo praised Pakistan’s role in the Afghan situation, including a successful evacuation operation, efforts for regional stability, and pledged to play a role in further improving diplomatic cooperation with Pakistan at all levels.

Later, the distinguished guest met Prime Minister Imran Khan in Islamabad, where they discussed the Afghan issue as well as bilateral relations between Italy and Pakistan.

On the occasion, Prime Minister Imran Khan said that Pakistan had suffered a lot due to protracted conflict and lack of stability in the neighboring country.

Prime Minister Imran Khan said that a peaceful and stable Afghanistan is in the best interest of Pakistan and the region.

FM Qureshi welcomes his Italian counterpart to the FO.

The Italian Foreign Minister was received by Shah Mehmood Qureshi at the Foreign Office.

According to a statement issued by the Foreign Ministry, the two envoys discussed the current situation in Afghanistan and bilateral issues.

On the occasion, FM Qureshi said that Pakistan attaches great importance to bilateral relations with Italy, adding that Italy’s efforts to curb the spread of Corona virus were commendable.

Pakistani FM thanked Mayo for its Italian cooperation in granting GSP Plus status to Pakistan, while the former congratulated the former on assuming the presidency of the G20.

FM Qureshi welcomed Mayo to Pakistan on Twitter and said that the visit of the Italian delegation showed the commitment of the two countries to work together for peace, stability and cooperation.

FM Qureshi welcomed to Pakistan. His visit reflects the commitment of the governments of Pakistan and Italy to work closely together for peace and stability and to raise the level of our bilateral cooperation.

In the latest Twitter post, FM Qureshi said that there are strong ties between Italy and Pakistan, which were strengthened by the 1.5 million members of the Pakistani people, which is a strong bridge between the two countries.

FM wrote in another Twitter post that he and his Italian counterpart supported a comprehensive political statement of Pakistan in the neighboring country and the importance of the international community’s involvement with the Afghan people, prioritizing their humanitarian needs. And expressed views on ensuring their economic stability. .

Pakistan and Italy enjoy cordial relations, both bilaterally and in the context of the European Union and the Multilateral Forum. The two sides are in close agreement on reforming the UN Security Council.