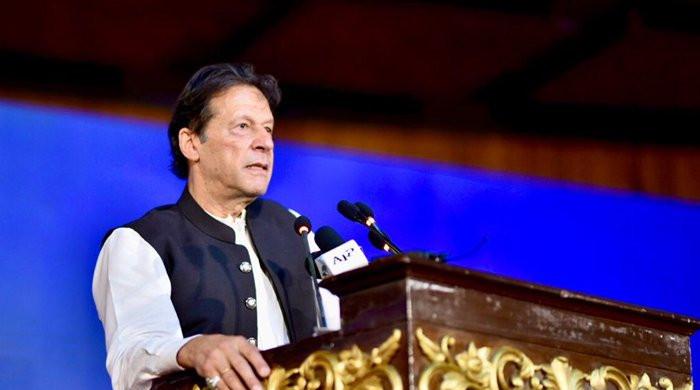 ISLAMABAD: Prime Minister Imran Khan on Tuesday announced that Pakistan has lagged behind due to lack of rule of law.

Addressing the audience on the foundation stone of Islamabad District Courts Building today, the Prime Minister said that the tragedy of Pakistan is that there are separate laws for the rich and the poor.

The Prime Minister spoke at length about the rule of law, speedy justice and development, highlighting where Pakistan went wrong.

We used to see Pakistan moving forward and then it started moving backwards, Prime Minister Imran Khan recalled that the country was moving towards development in the 1960s, but then things started going downhill slowly.

Comparing Pakistan with other third world countries like India and Bangladesh, he said that we are far behind in this day and age while these countries have taken the lead.

The Prime Minister accused the state of Pakistan of not having the rule of law. “We are left behind because there is no rule of law,” he said.

The NRO was the biggest atrocity.

The Prime Minister said that the biggest atrocity committed by General (retd) Musharraf against the country was to give NRO.

Prime Minister Imran Khan said that only a society that upholds the rule of law is prosperous.

Prime Minister Imran Khan said that the weak want justice and the strong want justice, assuring all possible cooperation with the judiciary in giving fast and cheap justice to the common man.

The Prime Minister noted that the rule of law is essential for the development of any society. “Providing justice to the people is our priority,” he said.

The prime minister said he was proud to be part of the 2007 lawyers’ movement, which aims to strengthen democracy and ensure the rule of law.

He called it a “historic” struggle. However, the Prime Minister lamented that the movement had not achieved its desired results.

In his remarks, Chief Justice of the Islamabad High Court Athar Minallah praised the Prime Minister for the initiative of the Islamabad District Courts Building to facilitate judges, lawyers and litigants. He said that district courts are the guarantors of the rights of the weaker sections of the society.