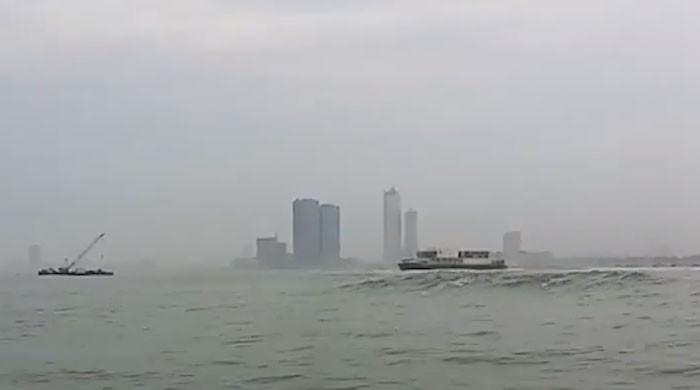 KARACHI: After a successful rescue operation, a cargo ship stranded off the coast of Karachi has finally resumed operations after 48 days.

Tug ships have taken control of the cargo ship Hang Tong 77, which is moving at a speed of three nautical miles.

Commodore (retd) Obaidullah, an expert on maritime affairs, told Geo News that the ship would be taken to the port. [by the tugs]. “

He said that it was due to two reasons, both its anchors were broken and the Pakistani government had taken the ship into its custody.

He added: “I do not want to use the word arrest. The ship has been taken into custody, which means it will be brought to the port where it will be monitored by government surveyors and even the ship. We will also test the water inside. “

Surveyors will also check the safety navigation equipment of the ship and its engines, he said. “The ship will remain here until the owner resolves the issues raised by the authorities,” he explained.

He said the ship could depart from Karachi port for any other destination once problems were identified.

Commodore (retd) Obaidullah said that fortunately the oil spill was avoided. He said that Pakistan Navy and other agencies have ensured that the ship has been cordoned off and arrangements have been made to stop the oil spill.

The ship has traveled 5-6km at sea and is expected to reach the port soon, he said. “Everything is going well,” he said.

Obaidullah said it took time to rescue the stranded ship as there was no dedicated rescue company in Pakistan, adding that three rescue attempts had been made earlier.

He said two tugs were with the Hang Tong 77, adding that one was on standby while the other was pulling the cargo ship.

According to a Karachi Port Trust (KPT) spokesman, the ship came ashore due to strong waves and a weak engine.

On July 20, the ship’s anchor broke, the ship’s captain said. He requested an immediate berth of the ship as it was difficult to handle the ship with only one anchor, but he was not provided a berth.

The captain then made an emergency call to Port Qasim and Manohra at 1:20 am, but KPT control did not provide help, KPT officials informed the media.