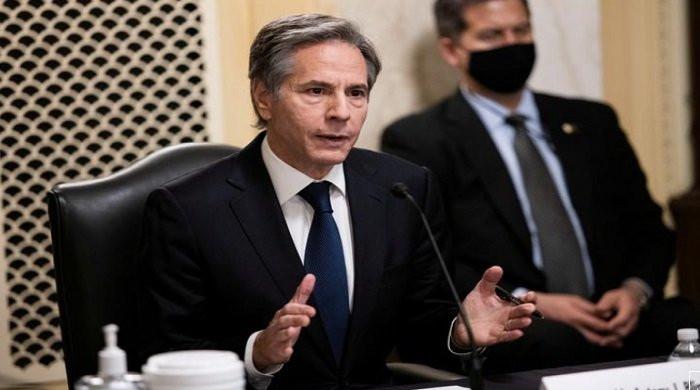 Germany: After consulting with allies on how to present a united front to the new government in Afghanistan, US Secretary of State Anthony Blinken warned on Wednesday that the Taliban must gain legal status from the world.

“The Taliban want international legitimacy. Any support will be sought,” Blakin told reporters at the US air base in Ramstein, Germany.

Standing next to him, German Foreign Minister Heiko Moss said the international community expects the Taliban to respect human rights, including women’s access to humanitarian aid, and to allow those who wish to leave the country to do so. Will allow

Moss said he believed Wednesday’s talks were “the starting point for international coordination” on how to deal with the Taliban.

The countries participating in the virtual meeting included Pakistan, a European ally and a historical supporter of the Taliban.

Both Blanken and Moss on Tuesday criticized the caretaker government announced in Afghanistan, which has no female or non-Taliban members, including an interior minister whom the United States wants to arrest on terrorism charges.

Blinken said the caretaker cabinet would be decided by “his actions”, while his German counterpart added that he was “not optimistic”.

US officials have stressed that any official identity of the Taliban government is far away.

Blanken’s stop in Ramstein was his second base visit several days after his visit to Qatar on Tuesday.

US civilian and military officials were thanked behind one of the largest planes in history after it fell to the Taliban in Afghanistan.

At the entrance to a large hangar where some of the 11,000 Afghans in Ramstein are waiting for flights to the United States, Blinken stood down and showed Mustafa Mohammadi’s four-year-old son an Afghan veteran on his children’s telephone. Became refugees who worked at the US embassy.

Blinken, a Holocaust survivor’s stepfather and longtime refugee lawyer, also visited a makeshift home for some children who have lost their parents.

“Many, many Americans are really looking forward to receiving you and coming to the United States,” he said.

Hanging on the walls was children’s artwork, including a picture of a girl on a rock under a deep blue sky with a broken heart and a message in English, “Tell my mother I miss you.”

The United States and its allies have blamed the Taliban for nearly 123,000 people, mostly Afghans, in the last days of the 20-year US-led war that President Joe Biden killed last month.

But US officials acknowledge that many remain and say the Taliban have agreed to release them.

Blankenship vowed to put pressure on the Taliban to allow charter flights from Afghanistan because the US administration is still not doing enough to help those stranded.

“We’re doing our best to help these flights and get them off the ground,” Blanken said.

Germany, like many US allies, insisted on Biden’s victory over Donald Trump and the new administration’s statement to work with the rest of the world.

But even some close allies are criticizing how Biden ended the 20-year war in Afghanistan, which toppled the Western-backed government in a matter of days.

Biden has long backed the withdrawal from Afghanistan, saying the US-led NATO mission had achieved its primary goal of accountability for the 9/11 attacks 20 years earlier this year and that the United States No more blood or treasury investments. Weak government