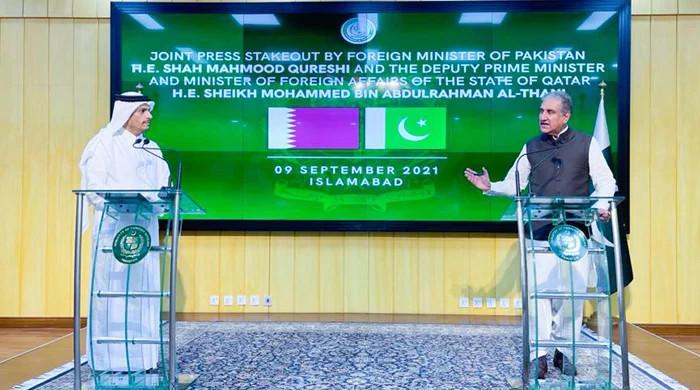 ISLAMABAD: Pakistan and Qatar on Thursday urged the international community not to make humanitarian aid conditional on Afghanistan, almost a month after the Taliban took over the country.

The two countries, Qatar and Pakistan, will work together to rebuild Afghanistan’s infrastructure. […] We will not allow the enemies of peace to prevail in Afghanistan.

The foreign minister said Pakistan would first work to provide food and medical aid to Afghanistan, as he highlighted the need of the hour to save lives in the country.

Shah Mehmood Qureshi warned the international community to beware of elements that could disrupt peace in Afghanistan. “We will not allow those who disturb the peace to achieve our goals,” he said.

He called on the international community to give Afghanistan access to its overseas reserves, which had been frozen since the Taliban came to power.

“Afghanistan’s assets must be immediately frozen for the Afghan people,” he said.

Talking about Pakistan’s humanitarian efforts, he said Islamabad had started sending medical and food aid to Afghanistan by land and air. He warned that the situation would not improve if the international community did not provide financial support to Afghanistan.

The Foreign Minister acknowledged that Qatar has played an important role in the Afghan peace process and said that both countries would work for a stable Afghanistan.

Talking about his meeting with the Qatari Foreign Minister before the press conference, Shah Mehmood Qureshi said that he had discussed border and regional security issues with him.

Qureshi said Pakistan and Qatar see each other as partners in Afghanistan’s development.

“We requested that Pakistanis going to Qatar be allowed quarantine at their residence,” the foreign minister said.

A day earlier, addressing a meeting of foreign ministers of six countries, Shah Mehmood Qureshi had said that the international community must play a role in preventing the humanitarian crisis in Afghanistan.

“If the humanitarian crisis is averted and economic stability is ensured, peace can be strengthened and large-scale migration can be stopped,” FM Qureshi said.

He also urged the Taliban to ensure that Afghan soil is not used against any country.

“Change in Afghanistan is a reality,” Qureshi said, adding that the evolving situation in the war-torn county would have a profound effect not only on our region but also on the world.

Talking about the Taliban’s occupation of Afghanistan, the foreign minister said that no one could predict rapid change in the country and all previous predictions proved to be wrong.

He added that the prompt provision of humanitarian assistance to the United Nations and its various agencies would strengthen the confidence-building process.

Addressing a media briefing, the Qatari Foreign Minister said that Islamabad is a strategic partner of Doha, and the two countries have fraternal relations.

He said that Pakistan has played a leading role in the current situation.

International flights have resumed from Kabul today. […] And we will try to help Afghans with Pakistan. “

He added that Pakistan has also played an important role in the development of Qatar.

He agreed that humanitarian aid should be free from political action in Afghanistan.

Earlier in the day, Al Thani met with Prime Minister Imran Khan and the two discussed the progress of Afghanistan and the diversification of Pakistan-Qatar relations.

Highlighting that Pakistan has suffered greatly from the long conflict in Afghanistan, the Prime Minister emphasized the importance of a peaceful, secure and stable Afghanistan for Pakistan and the region.

On the changing situation in Afghanistan, Prime Minister Imran Khan stressed the need to strengthen the security situation, prevent the humanitarian crisis and stabilize the economy.

Prime Minister Imran Khan said that Pakistan has played and will continue to play its role in Afghanistan’s economic development, humanitarian aid and assistance.

The Prime Minister called on the international community to stand in solidarity with the Afghan people, engage in a positive manner and encourage them to ensure lasting peace, stability and economic development in Afghanistan.

He emphasized the importance of building bridges between diverse sectors, including trade and investment, energy, and people-to-people contacts.

Al-Thani, meanwhile, acknowledged Pakistan’s important role as well as its efforts for regional peace and stability.

He also reiterated Qatar’s commitment to maintaining close ties with Pakistan on bilateral and regional issues.