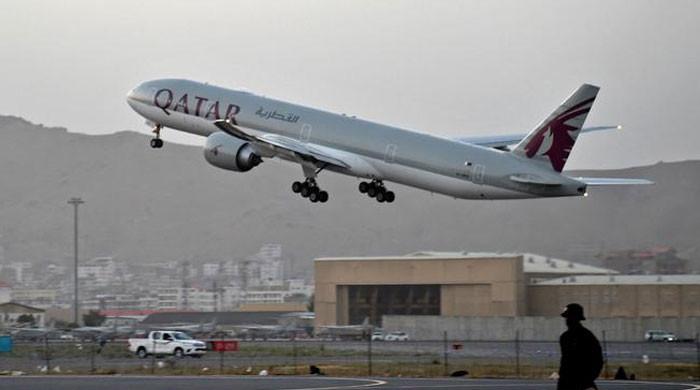 KABUL: More than 100 passengers, including some Americans, departed from Kabul airport on Thursday on the first flight carrying foreigners from the Afghan capital since the US-led evacuation ended on August 30.

The first international flight came as the Taliban continued to transfer power from the insurgents to the government, less than a month after they marched in Kabul and ousted President Ashraf Ghani.

An Afghan-American dual citizen, who was waiting to board a flight with his family, said the State Department called him in the morning and told him to go to the airport.

“We contacted the State Department, they called me this morning and told me to go to the airport,” the father told AFP on condition of anonymity.

In the days following the Taliban’s attacks, the airport became a tragic sign of frustration for Afghans fearful of the militants’ return to power – thousands of people crowded around its gates daily, and some even jets. Used to cling to .

A suicide bombing near the airport on August 26 killed more than 100 people, including 13 US soldiers, and was claimed by a local Islamic State group.

Away from the airport, the Taliban had a significantly stronger presence on the streets of Kabul as armed fighters – including special forces of military exhaustion – stood guard at roadblocks and checkpoints, according to AFP reporters.

Qatar has acted as a central mediator between the Taliban and the international community in recent years, and several countries, including the United States, have moved their embassies from Kabul to Doha since the Taliban took over.

Doha says it has worked with Turkey to quickly resume operations at Kabul airport to allow the flow of people and aid.

The White House spoke positively about how the Taliban handled the charter flight, which included the Americans.

National Security Council spokeswoman Emily Horn added: “They have shown flexibility, and they have been business and professional in our dealings with them.” .

White House Press Secretary Jane Psaki declined to say at a news conference how many Americans were on the flight, saying the plane had just landed and the United States did not have all the details.

Earlier, Saki had said that about 100 Americans were still in Afghanistan and wanted to leave.

Horn said the United States “facilitated” the departure of the Americans on Thursday and thanked Qatar for its role.

The Canadian Foreign Ministry said 43 Canadians were on board the plane and would be repatriated in the next few days.

Dutch Foreign Minister Sigrid Kagg tweeted that he thanked the Qatari government for “making it possible” and said there were 13 Dutch nationals on board.

Most early Afghan evacuees were desperate to escape the Taliban’s retaliation for 20 years, working with foreign powers during the US-led occupation.

The Taliban have said they will not stop anyone from leaving the country, even urging skilled Afghans, such as doctors and engineers, to stay.

Islamist extremists have vowed to rule a more moderate brand than in their notorious 1996-2001 era.

However, he has shown clear signs that he will not tolerate opposition.

Earlier this week, armed Taliban militants dispersed hundreds of protesters across Afghanistan, including Kabul, Faizabad in the northeast and Herat in the west, where two people were shot dead.

Late Wednesday, he stepped in to quell any further civil unrest, saying the protests would require prior permission from the Ministry of Justice, adding that “currently” protests are not allowed.

A protest organizer told AFP that rallies had been canceled due to an overnight ban in Kabul.

Despite previous promises of a comprehensive administration for all Afghans, the Taliban’s interim government, made up of particularly loyal ranks, has formally worked this week with hardliners in all key positions. started.

All high-ranking positions have been handed over to key leaders of the movement, and in particular to the Haqqani Network – the most violent faction of the Taliban, known for its destructive attacks.

Terrible Ministry for the Promotion and Prevention of Goodness – which was previously responsible for arresting and punishing people who are being reinstated for failing to follow the movement’s limited interpretation of Sharia.