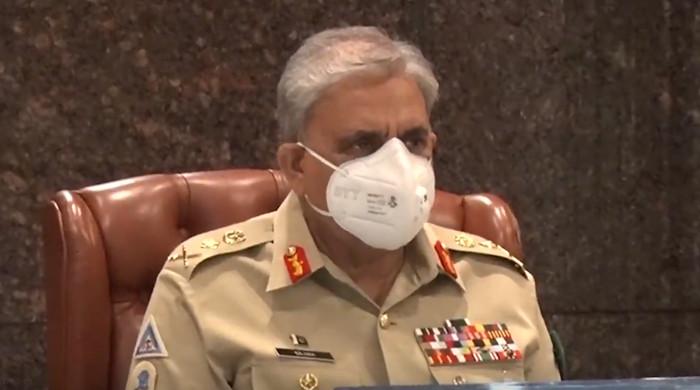 Chief of Army Staff General Qamar Javed Bajwa on Friday said that the constructive engagements of the international community and sustainable humanitarian assistance to Afghanistan are essential for lasting peace and stability in the country.

According to a statement from the Pakistan Army Public Relations (ISPR), the Army Chief’s remarks came during the Corps Commander’s Conference, which he chaired at the General Headquarters in Rawalpindi.

The forum was briefed on the current situation in Afghanistan, especially security on the Pak-Afghan border and effective security measures against various threats, the statement said.

During the meeting, the Chief of Army Staff expressed satisfaction over the usefulness of the comprehensive government of border management which has helped maintain Pakistan’s borders and internal security during the crisis in the region.

The media wing of the army said that General Bajwa appreciated the help and role of the army in expelling foreigners and Afghans from Afghanistan to other countries.

He further appreciated their efforts to hold Muharram celebrations in a peaceful manner and directed for full readiness to deal with traditional and non-traditional threats.

The Army Chief said that the design of external and internal forces for peace and stability in Pakistan would be thwarted at all costs.

The Forum, meanwhile, called for closer cooperation among all regional stakeholders for a prosperous and peaceful region.

The Forum also paid tribute to Syed Ali Shah Gilani for his lifelong struggle and sacrifices as the leader of the Indigenous Freedom Movement in Indian-occupied Jammu and Kashmir.

Ali Gilani, a symbol of the Kashmiris’ independence movement and former chairman of the All Parties Hurriyat Conference (APHC), died last week in Srinagar, Indian-occupied Kashmir.

The ISPR added that the forum expressed solidarity with the Kashmiri people who continue to face Indian state repression and violence.