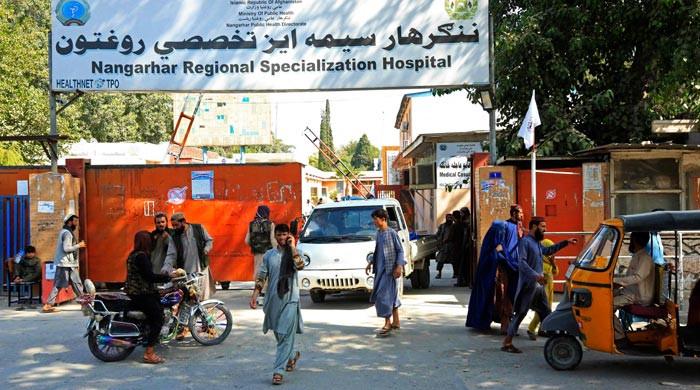 In Afghanistan’s first deadly attack since the US withdrawal, two people were killed when three bombs exploded in the Afghan city of Jalalabad on Saturday, hitting at least one Taliban vehicle.

The Taliban seized power in mid-August and promised to restore security in the violence-hit country.

An attack targeted a Taliban vehicle patrolling in Dzhalal-Abad, a Taliban official said on condition of anonymity. AFP.

The injured included women and children, he added.

Photographs taken at the site of the blast show a green pickup truck with a white Taliban flag surrounded by debris as armed fighters are seen.

Dzhalal-Abad is the capital of Nangarhar, the center of the Afghanistan branch of the ISIS group.

The US-led evacuation of foreigners and Afghans serving for international forces was affected by a devastating bombing claimed by ISIS that killed hundreds.

But since the last US troops left on August 30, the violent country, which has been plagued by fighting, bombings and airstrikes, has been free of major incidents.

Boys go back to school, not girls.

Saturday’s bombing came as the Taliban ordered boys and male teachers to return to secondary school in Afghanistan – but the girls were excluded.

The dictatorship by the Ministry of Education was the latest move by the new government to endanger women’s rights.

“All male teachers and students should attend their educational institutions,” said a statement ahead of classes starting on Saturday, the first day of the week in Afghanistan.

The statement, issued late Friday, made no mention of female teachers or female students.

Secondary schools, which usually have students between the ages of 13 and 18, are often sexually segregated. During the COVID-19 epidemic, they have been repeatedly shut down and have been shut down since the Taliban seized power.

Since the US-led overthrow of the Taliban in 2001, there has been significant progress in girls’ education, the number of schools has tripled and women’s literacy has almost doubled to 30 percent – however, Was limited to cities.

The United Nations has said it is “deeply concerned” about the future of girls’ schools in Afghanistan.

The United Nations Children’s Fund (UNICEF) said it was important for all girls, including older girls, to resume their education without delay.

‘Shoot yourself in the foot’

In another sign that the Taliban’s attitude towards women and girls had not softened, a sign outside the Ministry of Foreign Affairs was replaced with another – the announcement of the Frightened Department for the Promotion and Prevention of Goodness ۔

Videos posted on social media show female employees of the ministry protesting outside after losing their jobs.

Although still backward, Afghan women have fought and achieved basic rights over the past 20 years as legislators, judges, pilots and police officers.

The Taliban have shown little leniency in respecting these rights – no women are in government and many have been barred from returning to work.

Meanwhile, a senior US general admitted that he had made a “mistake” when he carried out a drone strike against suspected ISIS militants in Kabul last month, instead killing 10 civilians, including children.

Gen. Kenneth McKenzie, commander of US Central Command, said the strike in the last days of the US withdrawal was aimed at targeting a suspected ISIS operation that US intelligence planned to attack Kabul airport with “reasonable certainty”. Was

“The strike was a tragic mistake,” Mackenzie told reporters after the investigation.

McKenzie said the government was considering how to compensate the families of those killed.

“I offer my deepest condolences to the families of the victims,” ​​Secretary of Defense Lloyd Austin said in a statement.

The UN Security Council on Friday voted to extend the UN’s political mission in Afghanistan for six months, focusing on development but not peace.