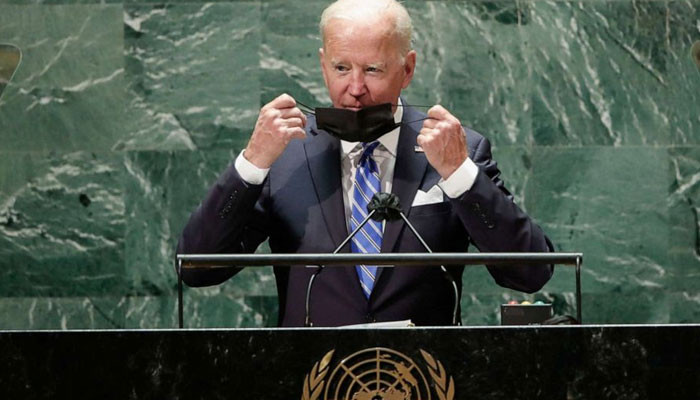 UN: President Joe Biden told the world on Tuesday that the United States does not want a new Cold War with China because of its commitment to emerging from the post-9/11 conflict and to playing a leading role in the global crisis. Has expressed

Within hours of the UN General Assembly, both Biden and Chinese President Xi Jinping made major new commitments on climate change, in the hope that the world’s two largest emitters and pollutants could develop. Are

The Biden administration has described a growing and dictatorial China as the biggest challenge of the 21st century, but in his first address to the UN annual summit, Biden made it clear he was not trying to divide.

“We do not want a new Cold War or a hard-boiled world,” Biden said.

“The United States stands ready to work with any nation that moves toward a peaceful solution to common challenges, even if we have serious differences in other areas.”

Biden did not name China, except for a human rights alarm in Xinjiang, where experts say more than a million Uighurs and a predominantly Muslim population are being held captive.

Biden, the first US president in 20 years, has announced that he will not fight a war after the withdrawal of his controversial troops from Afghanistan, where the Taliban quickly took power.

Instead, Biden said, the United States is “opening a new era of non-permanent diplomacy.”

Addressing the General Assembly rostrum from which former US presidents, including George W. Bush, lobbied for military action, Biden said the use of force should be a “last resort.”

Addressing the summit in a recorded video, Xi did not directly mention the United States, but called for “mutual respect” between the powers, saying “democracy is not a special right.”

As pressure mounts to tackle the growing climate crisis, Xi said China will cut funding for overseas coal projects, and eliminate the last major source of aid for waste energy. will give.

His announcement came as Biden pledged to double US climate aid to the worst-affected countries, estimated at .4 11.4 billion a year, at a UN summit in Glasgow in November. The High Stakes Conference will move forward with a significant difference.

Secretary-General Antonio Guterres welcomed both announcements. But he first called for dialogue between Washington and Beijing, warning that the world was moving towards two different systems.

The UN General Assembly is meeting in person for the first time in two years, but with limited capacity and epidemic precautions.

The measures include replacing the microphone after each speaker – potentially welcome news for 78-year-old Biden, who spoke after Brazilian President Jair Bolsenaro, who only guided people to participate in the vaccine against Covid 19. Refused

Biden called a virtual summit on Wednesday to tackle epidemics and sparked “additional promises” – US media reported the purchase of an additional 500 million doses of vaccine to be donated abroad.

Biden will spend a busy diplomatic weekend at the White House with an extraordinary four-way summit with the leaders of Australia, India and Japan – the so-called “quad” is widely seen as a united front against China. ۔

Biden met with Australian Prime Minister Scott Morrison in New York, but his efforts to strengthen the alliance were hampered by a major setback – France.

Paris angrily recalled its ambassador from Washington after Australia canceled a ارب 1 billion deal for conventional French submarines in favor of a US nuclear version as part of a new alliance with Washington and London.

The White House appears confident that it can calm the controversy, with Biden willing to speak by telephone with French President Emmanuel Macron, who is not attending the General Assembly due to precautionary measures.

“I never understood that we would not have problems with the new US president,” he told reporters.