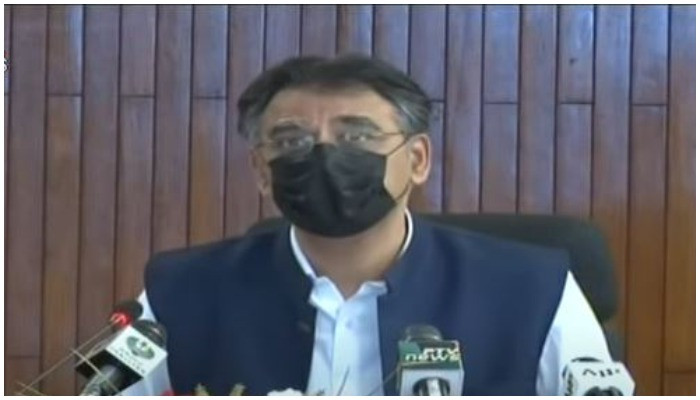 ISLAMABAD: The National Command and Operations Center (NCOC) has decided to ease additional restrictions in the districts of Punjab and Khyber Pakhtunkhwa after September 23.

A meeting of the NCOC, chaired by Federal Minister for Planning, Development and Special Measures Asad Omar, announced the new orders on Tuesday after seeing a decline in the spread of the disease in districts where the spread was high.

According to the new orders, restrictions have been relaxed in five districts of Punjab including Lahore, Faisalabad, Multan, Gujarat and Sargodha, and Bannu district of KP.

However, restrictions on the common corona virus will remain in place nationwide until September 30.

The NCOC will review a proposal for easing general sanctions on September 28.

Last week, the NCOC chairman announced that strict restrictions were being lifted on 24 districts across the country, with the exception of the six districts mentioned above.

The general restrictions that remain in place in the country are as follows:

Indoor and outdoor meals will be allowed until 11:59 p.m., while indoor dining is limited to only 50% of vaccinated people.

Offices and institutions will be allowed 100% attendance during normal working hours.

The Federating Unit will ensure a controlled tourism policy for vaccinated individuals only.

Wearing a mask will be mandatory for all services and activities that are permitted.

It was stated in the meeting that the NCOC is keeping a close watch on the disease transmission and healthcare system so decisions will be taken as per the need to control the spread of the virus.

Citizens are advised to get synoform vaccine as soon as possible keeping in view the availability of the said vaccine in large quantities.

The meeting observed that in the last 24 hours, the positive rate of Corona in Karachi and Lahore fell to 7%.

For the first time in two months, less than 2,000 COVID-19 cases are reported daily in Pakistan.

In the last 24 hours, 1,897 new cases of Covid 19 were reported in Pakistan on Tuesday, the lowest number of one-day infections in the last two months.

Pakistan’s Covid 19 positive rate, the lowest since July 11, fell to 4.10% as the country’s virus cases continued to decline.

According to the NCOC, after the latest increase in Pakistan, the total number of cases reached 1,227,905 while 81 deaths in the last 24 hours brought the death toll in the country to 27,327. The highest number of deaths occurred in Punjab, followed by Sindh.

The number of active cases is 62,922. There has been a steady decline in active activity over the past week. Of the active cases, 4,846 patients are in critical care.