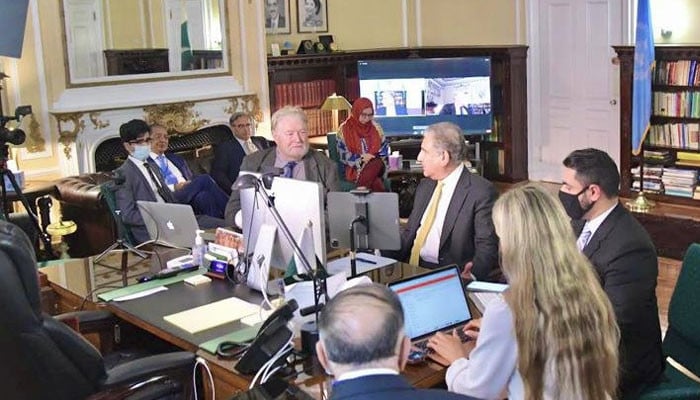 New York: Foreign Minister Shah Mehmood Qureshi said Wednesday that the Taliban were moving towards a comprehensive government a day after Tajik, Uzbek and Hazara representatives were included in the interim Afghan setup.

FM Qureshi made these remarks while interacting with international media representatives during a media talk organized by the Foreign Press Association.

The international community has warned that it will judge the Taliban by its actions, and that the Taliban-led government’s identity will be linked to the treatment of women and minorities and the inclusion of other groups.

“As far as I know, the government in Afghanistan is expanding and other races are being included,” he said.

The Foreign Minister praised the Afghan Taliban for including representatives of different ethnic groups in Afghanistan and urged the world not to leave the country at this critical juncture.

“If this report is true, they are moving in the right direction. The international community is talking about a comprehensive political settlement in Afghanistan. The international community wants to make sure that there are no terrorists in Afghanistan.” “There is no place for groups. At the same time, the Taliban have announced that they will not allow Afghan territory to be used against any country. We expect the Taliban to fulfill their promises responsibly.”

Foreign Minister Qureshi said that it was the right decision for the United States to withdraw its forces after achieving its goals, as according to Washington, its mission in Afghanistan has been completed.

Qureshi said that like Pakistan, all Afghanistan’s neighbors want peace in the country. He said that the responsible attitude of the Taliban government was in the interest of the group.

Qureshi said the Taliban’s declarations of an end to the war, respect for human rights and a general amnesty were encouraging, so the international community should not leave Afghans alone at this critical juncture.

She pointed out that Afghan women could be seen protesting in the streets in viral videos on social media. Qureshi said this was not possible 20 years ago, adding that it was an indication that things were changing in Afghanistan.

Welcoming the distribution of 1. 1.2 billion in humanitarian aid to Afghanistan in Geneva, the foreign minister said freezing the frozen assets of Afghans would help lift the country out of the humanitarian crisis.

He also noted that Pakistan has been hosting more than three million Afghan refugees for the past four decades without the help of the international community. He warned the world that if the situation in Afghanistan deteriorated, the risk of influx of refugees would increase.

He added that Pakistan could not afford more refugees.

Shah Mehmood Qureshi said that Pakistan provided unlimited assistance to the diplomatic staff and citizens of different countries for safe evacuation from Kabul but unfortunately Pakistan’s positive efforts were not appreciated.

The Foreign Minister also said that India wants to create instability in Pakistan. “India has used Afghan territory against us, as we have shown to the world,” he said.

We want peace and stability in the region.