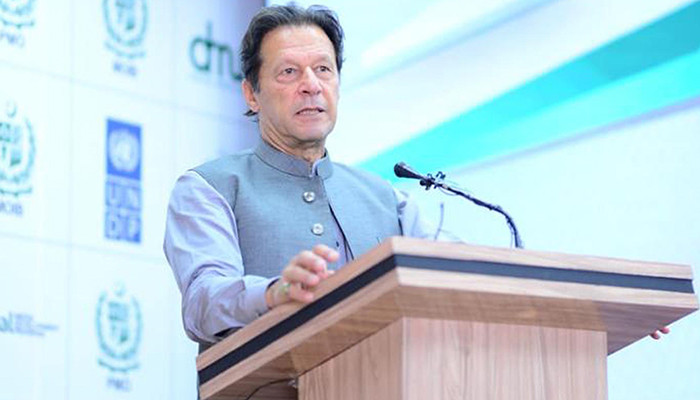 Prime Minister Imran Khan on Thursday said that the current government has given more freedom to news organizations than ever before, as he stressed that his government is not against free media, and only issues of “fake news and propaganda”. Is.

Addressing the inaugural ceremony of the Digital Media Development Program, the Prime Minister said:[Fake news] Destructive for the country. “

The Prime Minister urged the youth to promote the vision of Pakistan.

He noted that when a person speaks the truth, his stature in society increases and no one respects the liar. “The same is true of journalism. They can benefit by running fake news, but over time it will be discredited.”

“What matters is the credibility,” he said, adding that the PTI-led government wanted the media to tell the truth.

“You can take a look at the record, and I guarantee you that 70% of the programs are against us,” he said.

“I can assure you that the kind of slander against the prime minister and ministers has not been done in any other democracy,” he added.

Prime Minister Imran Khan said that when the Prime Minister of Azad Jammu and Kashmir was recently elected, there were headlines in three major newspapers which said that he had been selected for the post such as mer statistics.

What could be more backbiting than the fact that the present Prime Minister had elected the Prime Minister of Azad Jammu and Kashmir through statistics. If they published something like this in England, I can guarantee you that I would have lost millions of dollars and Shaukat Khanum has gained a lot from it. “

The prime minister said his government was not using its media to its advantage like previous rulers, who would “use it to divert attention from their corruption”.

Message to the youth.

The Prime Minister said that with the advent of information and technology, opportunities are opening up for the youth. “But for that you need to be open-minded and set a goal.”

Giving an example from his cricket career, the Prime Minister said that he left behind the most talented players as he remained consistent and set goals for himself, and urged the youth to do the same.

“Some people pass their exams because they are talented, but the students who keep working hard get ahead of them later,” the prime minister said.

Elaborating on his aspirations, the Prime Minister said he wanted the younger generation to promote the vision of Pakistan, which is “unique”. According to the Prime Minister, the goal is to establish a self-sufficient country.

The Prime Minister said that Pakistan has taken a step by providing health cards to every family in Khyber Pakhtunkhwa which “not even the developed countries” has done so that they can get health insurance of Rs. 1 million.

He said that this exercise is a step towards Medina, adding that the government strives to uplift the poor of the society as per the vision of Pakistan.

“Even the United States does not have such insurance,” he said.

The Prime Minister also highlighted that the government was setting up shelters and providing loans to people to build houses in line with the principles of a welfare state.