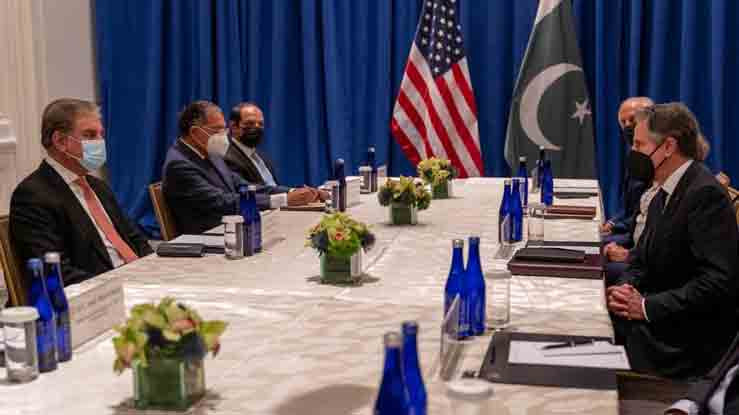 United Nations, United States: US Secretary of State Anthony Blankenship said Thursday that he believes the world is united in putting pressure on the Taliban after talks with key players in the new rulers of Pakistan, China and Russia, Afghanistan.

Blinken met with his Pakistani counterpart on the sidelines of the UN General Assembly on Thursday and held talks with ministers of four other members of the Security Council, including China and Russia, on Wednesday evening.

“I think there is a very strong unity of vision and unity of purpose,” Blanken told reporters.

Blinken reiterated US priorities for the Taliban, including allowing Afghans and foreigners to travel, respecting the rights of women, girls and minorities, and preventing Afghanistan from being re-used by extremists such as al-Qaeda.

Pakistan has demanded talks with the Taliban and the freezing of Afghan assets, but Qureshi said earlier this week that there was no rush to recognize the Taliban’s new government, a move opposed by Western countries. Has gone

“We must find a way to work collectively to achieve our common goal, which is peace and stability,” Qureshi said, beginning his meeting with Blinken.

Both China and Russia have been in contact with the Taliban, but they have also stopped acknowledging and there are long-standing concerns about extremism.

As the Taliban entered Afghanistan last month after President Joe Biden withdrew US troops, he said there was no point in extending America’s longest-running war beyond 20 years.

Pakistan wants a balanced relationship with the United States

Foreign Minister Shah Mehmood Qureshi called on US Secretary of State Anthony Blinken and discussed bilateral relations and the situation in Afghanistan.

Although the two top diplomats have been in contact since January this year, it was their first face-to-face meeting in New York on the sidelines of the 76th session of the UN General Assembly.

They last spoke to each other on the phone on August 16.

According to a press release issued by the Pakistani embassy, ​​the Foreign Minister said in the meeting that close relations between Pakistan and the United States have always been mutually beneficial and a factor for stability in South Asia.

He reiterated Pakistan’s desire for a balanced relationship with the United States that was anchored in trade, investment, energy and regional connectivity.

He stressed that only a stable and broad-based government in Afghanistan, which reflects its diversity and safeguards the country’s interests since 2001, will ensure that Afghan territory never Also not to be reused by international terrorist groups.

Noting that a new political reality has emerged in Afghanistan, the Foreign Minister said that while the Taliban must live up to its promises, it is the moral responsibility of the international community to address the growing humanitarian crisis of the Afghan people in Afghanistan. Help deal with

He hoped that the world would not repeat the mistake of seceding from Afghanistan.

The Foreign Minister highlighted the dire human rights situation in the illegally occupied Jammu and Kashmir and stressed the importance of resolving the Kashmir dispute for lasting peace and stability in South Asia.

According to the press release, Secretary Blanken appreciated Pakistan’s support for the expulsion of American citizens and other citizens from Afghanistan and its continued efforts for peace in the region.