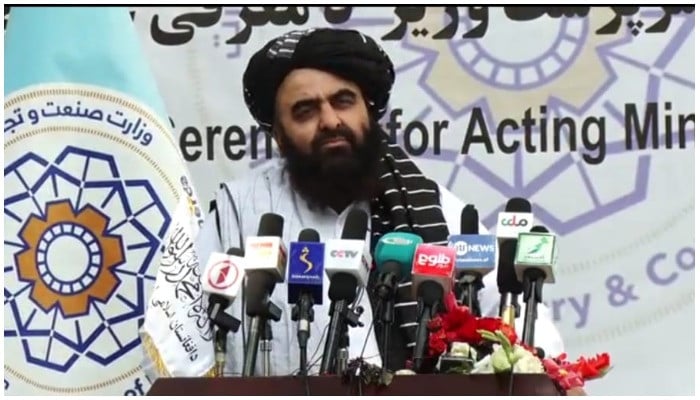 KABUL: Acting Afghan Foreign Minister Amir Khan Mottaki has said that anyone involved in the politics of partition will be released.

The statement was made at a ceremony at the Afghan Ministry of Commerce in Kabul on Sunday.

Referring to the Afghan war, Mottaki said that the credit for establishing peace in the country goes only to the local people of Afghanistan.

He said that in the past, a coalition of 50 countries had entered Afghanistan to overthrow the Taliban government, but when it came to establishing peace, no foreign fighters came to fight in the war-torn country.

Muttaqi said the Taliban would not allow anyone to use Afghan territory against another country because it maintained the position of the newly formed Afghan government.

“If any other country takes a step towards establishing friendly relations with Afghanistan, the government will be ready to move forward,” he said.

Mottaki acknowledged that although the new government is facing difficulties at the moment, its main focus is on the welfare of the people.

He said the government would create conditions where “no one will leave the country”.

The Taliban government will not force anyone to leave the country because their policy is to unite the people of Afghanistan.

Addressing the businessmen of the country, Mottaki said that this section of the society is responsible for the economic development of the country.

Muttaqi said there were no restrictions on traders and no market for bribes.

Opponents can make noise but we don’t care

Muttaqi said the Taliban government would be tested in light of the situation, but its relations with foreign countries would be as wide as they were in the past.

“Opponents can make as much noise as they want, but we don’t care,” Mottaki said.

Responding to a question, he said that not a single gun has been heard since the Taliban took over Panjshir province, adding that the government was committed to maintaining law and order in the country. Also making sure.

When a man was abducted in the Mazar-e-Sharif area, the Taliban captured him within three hours, he said.