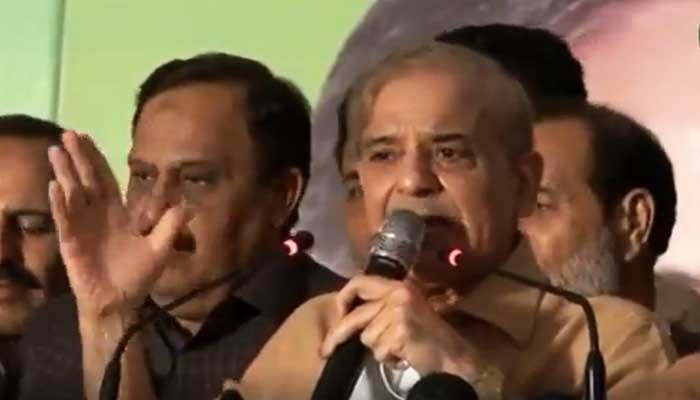 PML-N President Shahbaz Sharif on Sunday expressed confidence that his party was still in power in the country and said that PTI would be buried forever after the 2023 general elections.

Addressing the PML-N workers convention in Rawalpindi, the opposition leader congratulated the party on its significant victory in the recent cantonment board elections.

In the September 12 elections, the PTI won 63 seats, while the PML-N won 59 seats across the country.

“Our success in the cantonment board elections is not a trivial matter,” he said. “We have wiped out the PTI,” he said.

Talking about the 2023 elections, he demanded that these elections be held in a transparent manner, adding that he has these expectations from the Election Commission of Pakistan, the judiciary and all institutions.

Shahbaz said that three years ago, when the PTI came to power, “Pakistan was destroyed by the election of this elected Prime Minister”.

The opposition leader said that Pakistan had no dignity and had been left “useless”.

He added that he has ruined the economy with his loans.

“And this elected Prime Minister says again, you should not panic.”

Shahbaz urged the people to “take a stand” against rising inflation.

“They said they would provide millions of jobs, and instead lost millions,” he said.

He said that today the poor man is left with his equipment in which there is “no (cheap) medicine” and the prices of flour, pulses and sugar are skyrocketing.

Our 2018 Manifesto promises homes for the people. […] If we had a government today, we would have already provided housing to millions of people.

“If it were our time, millions of people would be given jobs,” he added.

Shahbaz also criticized the devaluation of the rupee, saying the dollar seemed to have “spread its wings”.

“We have to end this government with a tidal wave of people,” he stressed.

The need for unity in the party ranks

PML-N leader Khawaja Asif, who addressed the gathering before Shahbaz, echoed similar sentiments, saying the people were fed up with rising inflation and poverty.

He asked the party workers to be ready. “Elections can be called at any time,” he said, adding: “Soon it will be time to send packaging to the government.”

Asif urged party workers to unite in their ranks. “There is no conflict at the leadership level. Any contradiction at the local level must be eliminated. If we want to win the government mandate, we must be united at the time of elections,” he stressed.

The PML-N leader called on all supporters “from Karachi to Peshawar” to stand behind party chief Nawaz Sharif.

Reacting to Shahbaz’s claims, Prisons Minister Fayyaz-ul-Hassan Chauhan said that the opposition leader had termed all the elections except the cantonment board elections as rigged.

“The elections they win are declared transparent and the ones they lose are claimed to be free from fraud. This is an old PML-N habit,” he said.

Chauhan said that the people have been tired for the last three years, but they have been pushed by the PML-N to listen to “the same old statement”.

“Shahbaz Sharif says that if his party was in power, millions of houses would have been built,” the PTI minister said.

The Minister further said that during the tenure of Shahbaz Sharif, “every project of PML-N was exposed through audit”.

He said Shobaz’s claim to victory in the 2023 elections was a “crazy dream”.

Chauhan released a list of all the steps taken during the PTI era. “Prime Minister Imran Khan did his best to challenge the Corona virus crisis,” he said.

“The whole world has appreciated the benefits of the Smart Lockdown and Sense program,” he added.

Chouhan, referring to the PML-N leader as a “showman”, said the opposition leader would refrain from “tricks” including “trembling on stage, or fainting with a microphone”.

He said that the opposition should be ready to face an ideal defeat in the next elections.

He claimed that PTI would also win the next election based on its performance.