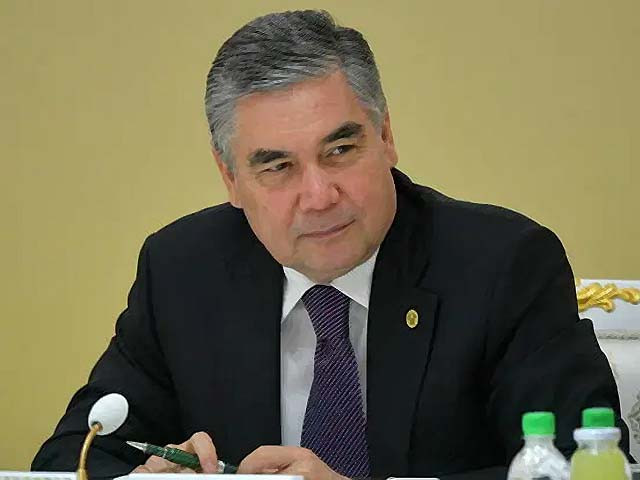 “The situation there (in Afghanistan – TASS) is not easy, the government and the public institutions that are being formed are very fragile. That is why it takes ultimate consistency, caution and responsibility to assess the situation in the country The situation in Afghanistan has changed, and when one has to formulate a vision for it, one needs to abandon ideological preferences, old grudges, phobias and stereotypes. One must first think of the Afghan people. Tired of wars and turmoil and dreaming of a peaceful life, we want the situation in Afghanistan to return to normal as soon as possible and expect the new government agencies to work effectively in the interests of all Afghans. Will work with

The world should take note of their country’s position on de facto leaders in Afghanistan, even though some governments, such as Russia, still officially consider them terrorists, even though they have a vested interest in peace and security. ۔

First, President Berdymukhamedov acknowledged that the Taliban were in the process of forming a government and restructuring public institutions. It is an objective reflection of the facts. These structures are really fragile at the moment, yet the former rebel group is still trying its best to handle everything.

Afghanistan’s foreign stakeholders should not have unrealistic expectations, so it is recommended to use “ultimate consistency, caution and responsibility – both in word and deed”. Putting pressure on the Taliban to immediately adhere to the socio-political models envisioned by these states can actually be effective.

Political rhetoric is one thing, while actions are another. The United States has frozen Afghanistan’s foreign assets under its jurisdiction and pressured the International Monetary Fund and the World Bank to suspend its lending programs. This threatens to exacerbate the country’s crisis.

In contrast, Pakistan and Tajikistan agreed last week to facilitate talks between the Taliban and insurgent Tajiks. This great gesture may not work, but it is still better to soften diplomacy to encourage a peaceful solution to Afghanistan’s problems, rather than to turn financial instruments into weapons as political instruments.

In his speech, President Berdymukhamedov wisely suggested that “one needs to abandon ideological preferences, old grudges, phobias and stereotypes, and first think of the Afghan people who are tired of war and turmoil.” Have been and are dreaming of a peaceful and serene life. ”

This can be interpreted as a subtle message to the Indian, Iranian, Tajik and Afghan groups under their influence. The three countries and the groups within Afghanistan that are most sympathetic to them must acknowledge that the majority of Afghans are relieved that the war is finally over.

The provocative statements of these governments and the attempts of these groups to create trouble are against the will of the Afghan people. Now is the time for us to move forward and chart a new future for the country. The Taliban deserve a chance to deliver on their promises, but they will need some time because stability comes first.

This implies that its recently appointed acting officials are all Taliban members and thus do not adequately represent Afghanistan’s ethnic political diversity. The group preferred reliable and trustworthy people to fresh faces because they did not want to risk any setbacks or failures at this crucial moment.

However, these views have raised concerns that the Taliban have not really changed, but such concerns represent some – though not the most important – these observers’ “ideological preferences, old grievances, phobias and stereotypes.” Concepts. Instead of being open-minded, they are judging the Taliban by these principles.

It is difficult to acknowledge that the Taliban’s claims have been corrected on the basis of value, especially when the formation of its acting officials appears to discredit those hopes, but the group has gained experience immediately after the war. There is also a right point to prioritize stability over. With political reforms

What President Berdymukhammedo is showing is that it is too early to draw any conclusions, and those who have already reached despair are not objective. It is acceptable to have some concerns, but their exploitation under the pretext of putting pressure on the Taliban through words and deeds is unacceptable.

Doing so could inadvertently help further destabilize Afghanistan, especially with regard to the use of financial instruments by Western countries when the country already needs such assistance. Much more is needed to avert its impending humanitarian crisis.

The Turkmen leader called for “the normalization of the situation in Afghanistan as soon as possible” and his “expectation”.[ation] That the new government institutions will work effectively in the interests of all Afghans is a message to both the Taliban and the country’s foreign stakeholders.

First of all, he is saying that he is committed to the reforms he has promised, even if he still takes some time because he believes that he is really in the interest of all the Afghan people. For others, they would like to acknowledge the real leadership of the country’s Taliban and engage with it in practice.

If the Taliban backtracks on their promises and / or the country’s foreign stakeholders refuse to engage with the group in practice, it will be against the “interests of all Afghans.” Given the country’s constitutionally neutral status, Turkmenistan’s position should be considered the most objective in the world.

The Central Asian state is by no means considered a biased actor, whether in the Afghan conflict or elsewhere. It has not joined any regional bloc, not even the Shanghai Cooperation Organization (SCO), although it has positive working relations with itself and others.

That is why Turkmenistan has an unprecedented moral legitimacy to talk about Afghanistan. The country has no external interests but sees itself as the most objective observer of events. What he wants is regional stability. It is hoped that the world will take note of his position and follow the advice of President Berdymukhamedov.