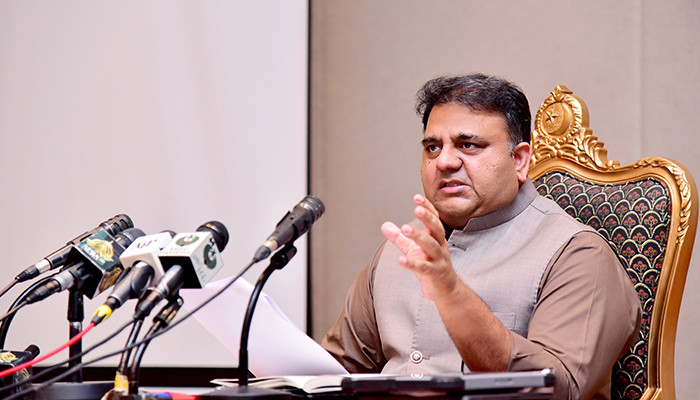 Federal Information Minister Fawad Chaudhry said on Tuesday that the government has decided to ban private moon sightings and only announcements by the government or the Ruwit Hilal Committee will be considered.

Addressing a post-cabinet press conference in Islamabad, he said the decision was taken following new legislation on moon sightings. “Only announcements by the Ruwit Hilal Committee or the government will be considered final and binding.”

Apart from the federal government, provincial and district committees will also be formed to observe the moon, the Information Minister said, adding that officials from SPERCO, Pakistan Meteorological Department, Ministry of Religious Affairs and Ministry of Science and Technology have also been included in the vision. Hilal Committee

The government welcomes talks with the opposition on electoral reforms.

The Information Minister said that the PTI-led government has also welcomed the opposition’s readiness to discuss electoral reforms with the Center. A committee of both the houses was constituted to resolve the issue.

He said the committee should go in the right direction to resolve the issue and not waste time.

The Information Minister said that Electronic Voting Machine (EVM) and i-voting are an important part of the reforms. If we exclude Pakistanis abroad from the voting process. […] It would be an injustice to them. “

The Information Minister said that most disputes arise when the votes are counted and that the government had shared a study of the Philippines with the Election Commission of Pakistan (ECP), where 300 personnel were killed during the operation. “It simply came to our notice then that the Philippines did not use EVMs.”

The federal minister said that the government has imported 20 machines and hoped that they could be used in the next elections.

“No current government in Pakistan has paid attention to electoral reforms. It is a PTI-led government that aims to introduce them,” the minister said.

The federal minister said the government would bring its agenda to a joint sitting of parliament and reiterated that the government was ready to talk to the opposition on electoral reforms.

Expansion of the online visa system

The federal cabinet has expanded the Pakistan Online Visa System (POVS), through which the country issues e-visas, Chaudhry said, adding that it is now available in 191 countries out of 50.

“The goal is to promote tourism and business – and through this, citizens of 191 countries will be able to obtain Pakistani visas while staying at home,” the information minister said.

Chaudhry said the federal cabinet had approved humanitarian aid to Indonesia in a spirit of goodwill. “It’s a sign of goodwill because they’re fighting the corona virus.”

The economic indicators presented to the Cabinet show that remittances have increased by 5. 5.4 billion, revenue collection has increased by Rs 858 billion during the first two months of the financial year, agriculture, manufacturing and The services sector has also grown, Chaudhry said, adding that foreign exchange reserves are at record levels, at 27 27.2 billion, while exports have increased by 4. 4.6 billion.

He noted that inflation has risen, but so has agricultural income.

Replying to a question, the Information Minister said that if the case of PML-N President Shahbaz Sharif was heard on a daily basis and on merit, he would soon be in jail.

The Information Minister hoped that Shahbaz’s case would be wrapped up as soon as possible so that the Pakistani people could “finally get rid” of the Sharif family.

Chaudhry’s remarks came a day after a British court ordered the freezing of the opposition leader’s bank accounts and the accounts of his son Suleiman Sharif.

The court’s decision follows a ruling by the UK’s top anti-corruption body, the National Crime Agency (NCA), that there was no evidence of money laundering, fraud or criminal conduct against both.