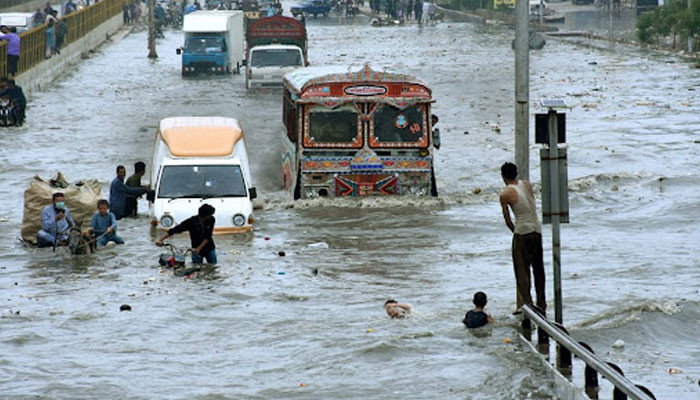 KARACHI: The low pressure system in the Arabian Sea, 250 km from Karachi, has moved towards deep pressure, Meteorological Department (PMD) Director Sardar Sarfraz has warned that the rain system could be changed. sea ​​storm “

Speaking on Geo News program “Geo Pakistan”, Sardar Sarfraz said that 150 mm of rain is expected in Karachi in the next two days.

He said that heavy rain is expected in Karachi from tonight. He said it could flood the city.

He added that rains are expected across the province under the system.

The Chief Minister assigns tasks to the Sindh Ministers.

In light of the Met Office’s report that Hurricane “Rose” is expected to intensify again and cause urban flooding in Sindh’s coastal cities, Chief Minister Murad Ali Shah on Thursday took various precautionary measures and instructed his ministers. Assigned work.

Sindh Chief Minister Murad Ali Shah has assigned different districts of Karachi to his provincial ministers, each of whom has been assigned the responsibility of his area.

Special Assistant to the Chief Minister for Inter-Provincial Coordination Timur Talpur has been assigned to monitor the rain situation in Korangi, Deputy Speaker Shehla Raza will work for Karachi District Central while Minister for Zakat and Usher Sajid Jokhio will work for Malir District.

Pakistan’s Meteorological Department (PMD) on Tuesday issued a meteorological advisory stating that a low-pressure area it has identified as “remnants of Cyclonic Hurricane Rose” was hit in the northeastern Arabian Sea on Wednesday. But there is a possibility of re-emergence and extensive torrential rains on the Makran coast of Sindh

According to the PMD, the low pressure area, which currently lies over central India, is likely to move northwest (towards Indian Gujarat).

The PMD had warned of strong winds and thundershowers in Karachi, Hyderabad, Thatta, Badin, Mirpur Khas, Thaparkar, Umerkot and Sanghar.

During this period, ocean conditions will remain rough / very rough with occasional increase in waves.