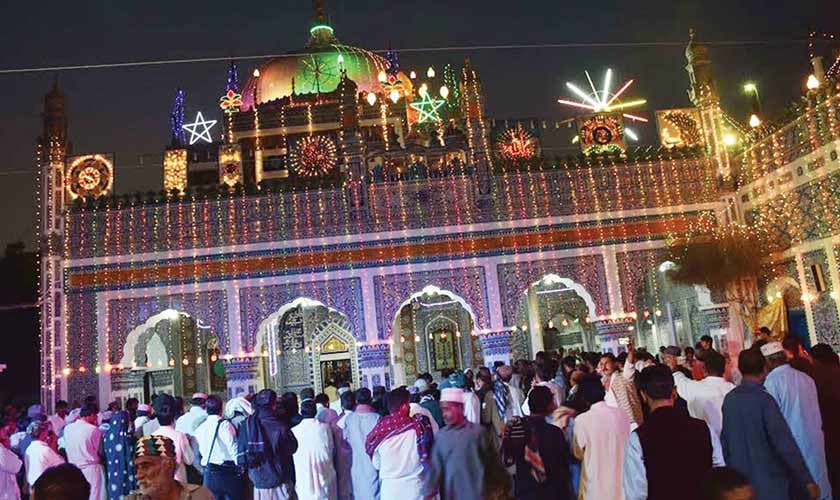 S.Yes, Abdul Latif Bhattai, on this. Wedding, Remembered for the many legacies he left behind, the most important being music. During the period. Wedding, Singers chant slogans. وائی At the main entrance of the shrine, a sarcastic composition of his poetry دھمبوری, Which is said to have been modified to suit his musical needs. In addition to the annual gathering, musical performances take place every week or every day.

Amir Khosrow, who is generally seen as instrumental in making music compulsory in the shrine rituals in and around Delhi, is said to have been credited with creating some of the forms: Patchwork, Stories And bandage. However, he did not elaborate on the whole system because later music scholars thought that the expression of music was also necessary for their sensitivity.

With some reservations, it is important to note that when music or other impressions become an integral part of religion, one always wonders whether these rituals should be considered or considered. In this example, there is music. گربانی, Art or just a religious ritual? Should everything that is being done be considered part of a religious ritual and be left alone for fear of interfering with another faith, or should it be viewed and evaluated for its artistic merit?

Perhaps another example is the Sikh compilation of music that can be cited where local sensitivities conditioned its classification. One of the essential rituals of the Sikh religion. گربانی – The song of the sacred text that contains it. شبد And Keraton It is always sung in the Darbar Sahib of Amritsar, which indicates the importance of music, song or painting as it is an integral part of their religious rituals, or perhaps in their religious as well as spiritual sense. Also These singers are usually distributed by the religious establishment. راگیاں And ربابیوںThe former are Sikhs, while the latter are Muslims and are said to be descendants of Bhai Mardan.

Shah Abdul Latif Bhattai’s contribution to music can also be seen in the context of the relationship between a high classical tradition and its regional sources. It was an attempt to codify a music system that was more specific to the region. King Abdul Latif’s music was an expression of his sensitivity, which is obviously subject to the morality of the earth. The musical mode for which it is credited is very strange to the region and once again reinforces the argument that local traditions have become mainstream music, each with its own part.

In all, he picked 36. raginis. Thirty were set aside for special songs of Shah’s own poetry, while six other compositions were used for singing. Of Patchwork Some of the things he mentions in his works about classical music are: Kalyan, Khambhat, Siri, Sahni, Sarang, Kedara, Desi, Barova Hindi, Surath, Barova Sindhi, Ramkli, Bilawal, Asa, Dhansari, Purbi, Kamud, Yemen, Hussaini And Basant.

Of the king Patchwork Indicate that it is intact. کلیان۔, کھمبھٹ۔ And Bilawal in them شودھ (Original) state because these are the three basic. ثات Including some of the group’s melodies. The 14 other melodies of the classical tradition were retained in the form in which they sang. The functional composition of each of these melodies does not necessarily conform to their classical prototype. The following 17 were selected from Sindhi Folk Music. Beach And کریال۔

Mardan, known as Bhai Mardan, was one of Nanak’s close friends, a Muslim, in the manner in which Sikhs tolerate and express respect. It is said that men used to play. رباب And sing. Known as his descendants. ربابیوں He was tasked with composing Nanak’s text into music, and possibly other religious writings of later gurus. Very few people know the exact details of Bhai Mardan’s life, but he was a very close companion and accompanied him on many epic journeys that Nanak undertook in some parts of the civilized world.

Bhai Mardan, since he was a musician, must have compiled Nanak’s poetry on music and his descendants continued to do so and became government ministers for the Sikhs. Another name that is mentioned in history is that Bhai Fernanda was very close to Nanak and was a minister and arranged the text on music or chanted its slogan. شبد And Keraton.

The classical tradition in the region has always been seen as an extension of the cultural dominance of the Central Empire, which ruled territories from its capitals and was therefore a tool to simplify an imperialist design. On one side were the ministers who sang ancient folk songs, wandering from village to village Wedding Of different Monday And Sofia Which are abundant in the subcontinent. On the other hand, there were court musicians who accompanied him.NikeThe supremacy of classical tradition in Sindh. Classical musicians were non-Sindhi. They migrated to Sindh and were patronized by various courts. The most important was Khairpur. These musicians and singers then matched local music patterns with their more formally formed musical systems and created something unique. To many Sindhis, this is tantamount to spoiling the ancient beauty of an art in order to make it a victim of art.

In the sacred texts of the Sikhs, many. Patchwork Songs and slogans are suggested. شبد And Keraton. Some have been nominated for specific text compositions, while others have not been made as formal in their description. Sohi, Bilawal, Gound, Siri, Majh, Gori, Asa, Gojri, Deogandhari, Bahagra, Surath, Dhansari, Jetsri, Todi, Bheragi, Telang, Ramkli, Nut Narain, Mali Gora, Maro, Takhari, Kedara, Bherao, Basant, Sarang, Malar Jijawanti, Kalyan, Vadhans, Prabhati. And کانرا۔, All 31 numbers are nominated. Patchwork.

Mardan’s descendants must have been outstanding musicians, but no record has been set to reveal who was really great. However, if there is any sign of the passing of the 20th century, many people have reached this peak like Master Ghulam Haider, Bhai Desa, Bai Lal Muhammad, Rashid Attar, Wajahat Attar, Sai Akhtar Hussain, Tufail Niazi, Ustad Ghulam Hassan Shagun. , Wazir Afzal, Hamid Ali Bela and Munir Hussain. Almost all ربابیوں At the time of partition Pakistan migrated, mostly from Punjab and some from Bombay and Calcutta where they were attracted by the theater / film world.