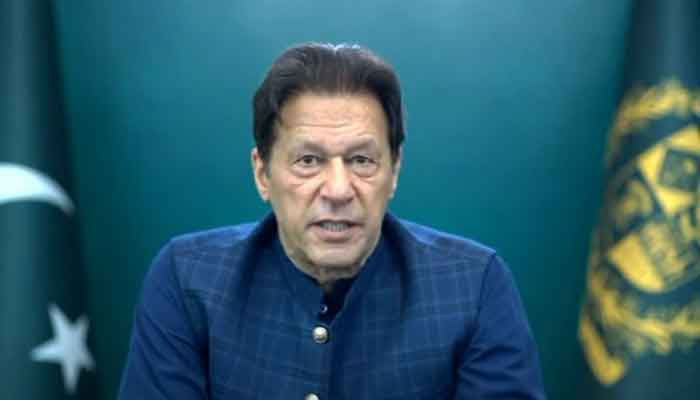 ISLAMABAD: Prime Minister Imran Khan has said that the US government was confused after the Taliban took over Afghanistan.

In an interview with TRT WorldPrime Minister Imran Khan has said that Washington will sooner or later have to recognize the Taliban government in Afghanistan.

The Prime Minister said that if Pakistan unilaterally recognizes the Taliban, it will have no effect.

Pakistan is in talks with neighboring countries on the issue and a decision will be taken after consultation.

When asked about the Taliban’s takeover of Kabul, Prime Minister Iman Khan said, “We were afraid of the bloodshed during the occupation of Kabul and the peaceful transfer of power was unexpected.”

The world should not leave the Afghan government.

He reiterated his call on the international community to provide assistance to the Afghan government, which he said was largely dependent on foreign aid.

If the international community does not come forward to help the Afghan people, a humanitarian crisis will ensue.

The prime minister said the US administration was confused after the Taliban took over and was now looking for a scapegoat. “It hurts to see them making scapegoats to divert attention.”

The United States had no idea about the situation in Afghanistan

He added that there was no military solution to the Afghan problem because the Afghan people did not accept foreigners and according to their traditions they wanted revenge if someone was killed in their homes.

He explained that those blocking Pakistan’s tribal areas launched attacks on Pakistan, led by groups such as the Tehreek-e-Taliban, when the government decided to side with the United States.

If you did not agree with US policy or its military operations, they said you were called pro-Taliban.

Military power is not the answer

He said he was also opposed to the Iraq war because the use of military force was not a solution to the conflict.

The Prime Minister said that no Pakistani was involved in the 9/11 attacks, but the country had suffered heavy losses in the US-led war.

About 80,000 lives were lost, a large section of the tribal population was displaced with hundreds of billions of rupees in losses to Pakistan’s fragile economy, while border areas were destroyed, he said, adding that Pakistan had made these sacrifices for the United States. They have made a scapegoat. .

He said a well-trained 300,000-strong Afghan army, fully armed, could not resist the Taliban force and the former president fled the country with his government officials.

The Prime Minister expressed the hope that when this angle and mentality became apparent, the United States would realize how Pakistan could be held accountable for its policies on Afghanistan.

He vehemently denied allegations that Pakistan had been helping the Taliban to occupy Afghanistan. He added that the Taliban were seen riding motorcycles without shoes in Kabul.

The Prime Minister said that the Afghan people have always resisted foreign forces, and were very open-minded people. “You can’t control them. [the] Like outside [the] The United States tried.

In response to another question, he said that from Pakistan’s point of view, “comprehensive government means a stable Afghanistan after four decades of war”.

” [the] Afghan people, we want them to be stable. The idea that they can be controlled from the outside is a fantasy. Pakistan only suggested that there should be a comprehensive government.

Prime Minister Khan said Afghanistan is home to multi-ethnic groups, with Pashtuns in the majority, Tajiks, Uzbeks and Hazaras in the minority.

It is unfair to criticize Biden

Defending the US president, he said it was unfair to criticize Biden.

“It’s strange that if you criticize US policy, you are labeled anti-American,” he said. The Prime Minister said that he objected to the US policy of supporting Pakistan in the war on terror which caused a loss of 150 150 billion to the country.

When asked why the US President did not call him, Prime Minister Imran Khan said that Biden was under pressure at the moment. “I sympathize with Biden. He is facing criticism at home. [over the Afghanistan policy]. Talks between heads of state are just a formality.

He said that Pakistani and US intelligence officials were in touch, adding that foreign ministers of the two countries were also holding talks.

The prime minister said Pakistan had launched a major military operation against Taliban militants in 2014 and eliminated them.

India’s RAW and Afghanistan’s NDS were supporting the TTP for activities in Pakistan.

However, he added that TTP attacks have increased in the last 40 days, but the situation is not as dire as it used to be.

“I think some Pakistani Taliban groups actually want to talk to our government. You know, some for peace, some for reconciliation.”

He said the Afghan Taliban were “helping” in the sense that talks were taking place in Afghanistan.

The prime minister said that if the disarmament talks were successful, the government would “forgive” them, and then [will] Become a regular citizen. “