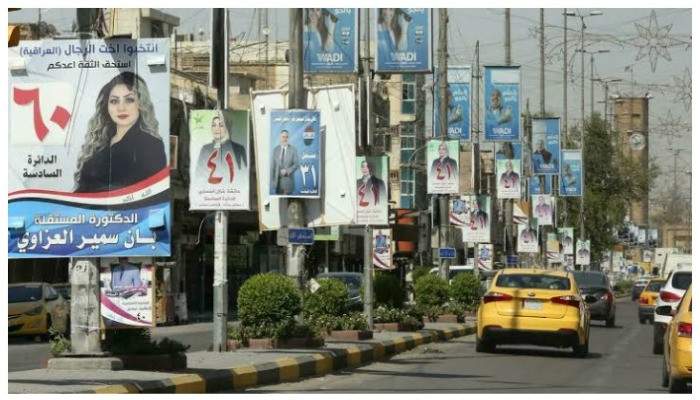 BAGHDAD: Iraqis will go to the polls on October 10, a year ahead of schedule in parliamentary elections, to quell anti-government protests in a nation plagued by corruption and the economic crisis.

The country is emerging from nearly two decades of conflict and insurgency when a US-led invasion in 2003 overthrew dictator Saddam Hussein, who had promised to bring freedom and democracy.

Although security has improved in recent years, the election threatens a new ups and downs that are still feared by militant attacks and where major political factions are heavily armed.

It is feared that the turnout among the 25 million eligible voters will once again decrease, many of whom are frustrated and see the entire political class as incompetent and corrupt.

Despite being a major oil producer, Iraq is “almost on the brink of economic and ideological bankruptcy.”

He added that the political system was “unable to provide enough jobs or services.”

According to UN figures, about one-third of Iraq’s 40 million people live in poverty, and last year’s drop in epidemics and oil prices added to a long-running crisis. Has deepened.

“The country is still mired in corruption that affects all institutions,” said Ehsan al-Shammari, an Iraqi analyst.

Prime Minister Mustafa al-Kazmi, who took office only in May 2020, pushed ahead with the 2022 scheduled elections as a concession to the unprecedented, youth-led protest movement that began two years ago.

Workers protested against corruption, unemployment, and the breakdown of public services, but the protests ended with a wave of bloody violence and the onset of the Cove 19 epidemic.

Kazmi’s political future hangs in the balance, with some observers ready to predict who will emerge victorious after a long battle between factions, usually after the Iraqi election.

Near the October 2019 protest movement, many parties and activists are boycotting the elections, condemning the anti-democratic atmosphere and the proliferation of weapons.

“Weapons are a big challenge, those who hold them are now above the law,” Shamri said.

“These factions are running in the elections through their political shop front groups.”

Washington has blamed pro-Iranian groups for attacks on its interests in Iraq, where 2,500 troops are still stationed as part of an anti-ISIS coalition.

Washington has announced the end of the US military’s combat mission in Iraq, saying its role would be limited to training Iraqi troops and sharing intelligence.

ISIS, for its part, has not disappeared as a threat.

As the militants have gone underground, their cells have stepped up attacks, including a suicide attack on a Baghdad market in July that killed more than 30 people.

A UN report this year pointed to a “significant increase” in ISIS attacks, including “sophisticated two-pronged attacks, fake checkpoints, kidnappings and executions of civilians.”