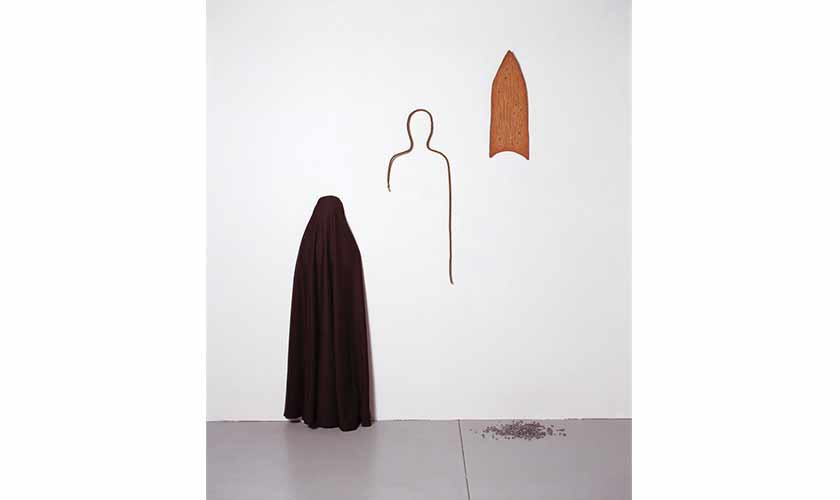 ‘W.Are you from here A beautiful English dress was asked by a beautiful English woman to put on her solo exhibition at the London Gallery in 1994. But the question stuck with every ‘outsider’ in the mid-90s, as non-whites were expected to show their identities at every entry point.

No one is sure what the situation is, and there are still questions to be asked, but Hussein Walmanish’s job where do you come from? One of the phrases reminds us that many travelers, laborers and immigrants are in this world. For centuries, people have lived in their homelands, continuing their family occupations, following the example of their ancestors in clothing, language, food, etc. However, with the advent of the 20th century, a place, The tendency to move from profession to practice has become an important factor, so ‘where do you come from’ is a concern as an existentialist, such as ‘to do or not to do’.

Today, not just an immigrant but everyone is considering this phrase. Because even if we never give up our address, we can become aliens in our acquaintance – to belong to a minority sect, gender, race and ideology. In fact, the real question involves the initial question: ‘Why are you different? Why are you rebelling? One question creative people often ask the public.

An artist, after leaving his style, medium, words and his original land, invites a range of reactions. One can recognize Hussein Walmanish by his nickname, because the Iranian-born has been living and working in Australia since 1973, so perhaps he – as Rushdie observed that a writer’s home is his language – his Belongs to art

His art is a habitual traveler between content, sensitivity and imagination. I Because everything passes., His first major museum exhibition in Europe (at the Institute des Cultures de Islam, Paris), works from 1985 to 2021 are on display from 23 September 2021 to 13 February 2022. . One of his personal shows was held at the National College of Arts (NCA) Gallery, Lahore.

A few pieces from Lahore are now part of the Paris Exhibition, which provides a rare opportunity to understand his perspective on external and internal affairs, as some works are influenced by Rumi’s writings.

Not only the verses of the 13th century Persian mystical poet, but also other Persian phrases seem to stand out for Walmansh. We think we are born and belong in a country, but in reality, it is the language that brings us to this world, our mother tongue. Language, in particular, is very important to a person who has moved out of his homeland, because no voice of conversation, or a piece of text in his rarely used language, can be found throughout the country, history, literature, Music brings back even the landscape. The tongue has deep roots like a tree, which often grows internally. Thus the two works of Valmanish, both of bronze, Don’t say anything, 2004, and It will pass too., 2012, contains Persian letters, but fabricated by joining twigs.

Traditionally, a part of a tree or plant (red pen, or some sharp branch) was written in the script. Valamanish forms his letters through a natural substance. Turns them into almost an oracle, a sacred message if we translate – not only from Persian, but also from Iranian culture. Its titles – about not speaking, and the hope of passing a stage – are somehow related to an oppressive environment, censorship, and all kinds of oppression. Bronze statue Don’t say anything, Reminiscent of Moon Yan, the adopted name of the Chinese Nobel laureate, author of another closed society. Mo Yan literally means ‘don’t speak’.

Self-separation can be from migration, but it is also possible in the realm of imagination, imagination and desire.

Some other works point to the situation in his remote and desolate homeland, e.g. Daily bread. (1995), featuring a traditional flatbread, a sketch of a man’s torso and a black burqa on the wall, with some pieces of stone on the gallery floor. This work, while pointing to economic conditions / pressures, is also echoed by the Mexican author, Juan Voloro, who observes that “the taste of bread depends on freedom.”

There are clear political references to what he left, but what he did not leave. His preference for the common good is related to Art Povira, an Italian art movement, about the use of poor, worldly and wasteful materials. At the same time, it is about the process of remembrance. As you walk, you can find some leaves, pebbles, little things you like, pieces of draft wood, shells, once removed from the initial environment, new meanings and identities. And reminiscent of a place where they ended up accidentally. Our memories are also like break-a-break, which we protect from different places, scenarios and competitions, and which, far from their source, are a separate character, an identity for us.

The presence of material in Valmanish’s art is not only saturated with various possibilities, but it also changes the formation of personal and cultural past. Through them, he “connects the context between Iran and Australia” to his twin homeland. The form of repetition appears in many works, e.g. Lovers Since 1996, with two men’s shirts, or Subdivision (1989) A man’s silhouette on a corrugated iron sheet that casts a shadow over traditional geometric patterns. Self-division, a changing ego, or the shadow of another culture, is a feeling that is repeatedly experienced in a world made up of homeless people, information, equipment, technologies, and maps.

Walmansch spread the idea through a map of the world on a fabric, where do you come from? 2013, or Four hundred 2015, a 4-channel video projection in collaboration with Naseem Walmanish, recording a historic market in Iran with men and women in their identity clothing. ‘Four hundred’, everywhere, literally means four directions, so for the artist this ideology envelops the image of a society known for being religious, reactionary, limited and oppressive, but other than that. There are other separate identities, for example Iran before the 1979 revolution – or before 1973, the year it left the Near East.

Self-separation can be from migration, but it is also possible in the realm of imagination, imagination and desire. Anyone in Walmansh can experience this. Seven steps (2009), the installation of a wooden ladder stuck to the acrylic mirror, continuing its length, the second half. This artwork exemplifies migration, as does its digital print. To nest, 2005. Man’s inverted torso on the branches of a tree. The nest was not made of straw but of man. Temporary, annoying and tiring solution as a picture of burning Persian carpets (Wish, relationship., 1997), the flame was caught in the middle of a traditional carpet that can be found anywhere in the landscape, from Iran, Australia, France, Pakistan, the United Arab Emirates, Africa and the United States.

I see flames. Wish, relationship. It is still in the heart and mind of every refugee, whether the reasons are political, economic, religious, cultural, or simply random. Walmansh’s amazing aesthetics is similar to the structure / accent of Persian poetry. It is precise, light and rich in layers of meaning. However, the artist does not have a passport to the national past (as many people like the lands of ancient civilizations), as he deals with ideas such as love, desire and loss, which transcend borders. Appears in works made of silk and electric motor in 1993, The lover goes round his own heart., Mechanical reincarnation of dervishes from Konya, Turkey. Like this ‘figure’, we are all moving forward: physically, practically, geographically, forever. Therefore, we are connected to the art and life of Hussein Walmanish – and with it, in more than one place, simultaneously, miraculously, miraculously.