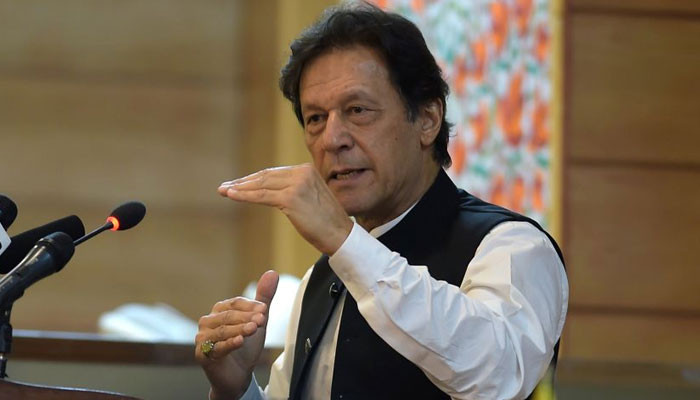 Addressing the inaugural function of the program, Prime Minister Imran Khan termed it a historic step and added that it would raise the living standards of the common man.

Criticizing previous governments, the prime minister said the project should have been launched 74 years ago. He further said that poor policies of the past have left the backward sections of the society far behind.

Prime Minister Imran further said that inequality is the basis of the decline of any society. He said that no government in the country has worked on uniform curriculum.

The Prime Minister said that our system is designed to facilitate the elite, adding that the state of Madinah is a role model for them. He said that people became prosperous after the establishment of welfare state in Madinah.

Referring to China’s development, the Prime Minister said that Beijing has taken steps to facilitate the weaker sections of society and has become a developed country in 35 years.

Talking about petrol prices, PM Imran said that prices of petroleum products in Pakistan are lower than other countries in the region.

“We have also tried to absorb the maximum pressure of the international rise in commodity prices. The Prime Minister said that the prices of petroleum products have gone up by 100 per cent but we have only increased their prices by 22 per cent.” What is it.

He said that his government had reduced sales tax and levy on petrol for the convenience of the people.

It is noteworthy that under the flagship program, the government will provide small loans of Rs 1.4 trillion to 3.7 million households across the country.

KPP will be launched in phases.

KPP will be launched in phases. During the first phase, loans will be provided to deserving families in Gilgit-Baltistan, Azad Kashmir, Balochistan, Khyber Pakhtunkhwa and backward areas of Punjab and Sindh.

In line with the Prime Minister’s vision of empowering the people, the government has taken a number of initiatives aimed at alleviating poverty, creating employment opportunities and providing affordable housing for the people.

The KPP initiative is designed to change the lives of the backward sections of society. The program will distribute Rs. 1,400 billion in microcredit to the poorest, providing the necessary financial support to improve their livelihoods. Under KPP, financing will be given only to those families whose average average monthly income is up to Rs. 50,000.

This is the first program of its kind in the history of Pakistan in which banks are being linked to the lowest income group through microfinance institutions. The PPP is based on Finance Minister Shaukat Tareen’s vision of financial empowerment, that is, creating opportunities to improve the financial health of people with limited access to resources.

The finance minister said the government is committed to not providing fish to the poor but teaches them how to manage sustainability under the umbrella of the KPP. The whole model of KPP will change the lives of the backward people in Pakistan. The program is based on the latest financing structure in recent times.

Under the first 3 components, micro-loans will be distributed to eligible persons registered with Ehsas Data, which will be scientifically collected through the National Socio-Economic Registry (NSER).

The last two components of the PPP will be linked to the government’s current initiatives. Successful Skills is designed to integrate our talented youth into the government’s ongoing Skills Program for educational and vocational training.

KPP also includes a user-friendly portal called Successful Pakistan Information System (KPIS). The portal will be integrated with Ehsas and NADRA databases to verify the eligibility of the beneficiaries to facilitate the implementing agencies (ie MfPs) so that the financing methods are highly efficient and seamless. To be finalized.

The KPP will complement the government’s efforts to combat inflation by enabling the people to improve their livelihood.

The KPP is a real dispensation of a responsible state that focuses on the “bottom line approach” for the betterment of its poor and vulnerable, as envisioned by the Prime Minister.