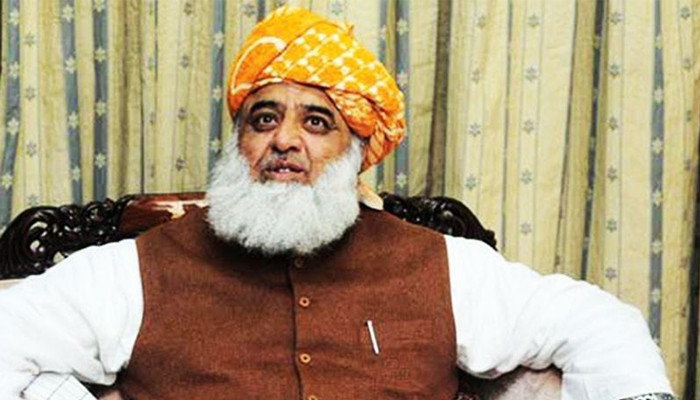 Addressing a press conference in Peshawar, the head of the Pakistan Democratic Movement (PDM) said: “When JUI-F asked them for help, thousands of people answered the call.”

He said that since the PTI-led government came to power, his party has been calling it an illegal government.

“We will not accept electoral reforms regarding thieves,” Fazal told a press conference in Peshawar. He further said that Electronic Voting Machines (EVMs) have also been rejected by the Election Commission of Pakistan (ECP).

The PDM chief said that the government which came to power through rigging was now talking about electoral reforms.

The JUI-F chief was of the view that Pakistanis abroad had also left the government.

He said that first young people and now Pakistanis living abroad are being deceived.

He also highlighted the economic crisis facing Pakistan and said that “the country’s economy has been devastated.”

He said that Pakistani rupee has reached its lowest level against US dollar so far.

“Most of the investment came from China, but the government did not use the money properly,” he said.

The government intends to hold talks with the opposition on electoral reforms.

In late September, the PTI-led government welcomed the opposition’s readiness to discuss electoral reform with the Center, a few days after a committee was formed in both houses – the Senate and the National Assembly. ۔

Addressing a post-cabinet press conference in Islamabad, Federal Minister for Information Fawad Chaudhry had said that the committee should move in the right direction so that the issue could be resolved and time was not wasted.

The Information Minister said that Electronic Voting Machine (EVM) and i-voting are an important part of the reforms. If we exclude Pakistanis abroad from the voting process. […] It would be an injustice to them. “

A statement on the lower house’s Twitter handle said the decision to form the committee was taken during a meeting of opposition lawmakers with National Assembly Speaker Asad Qaiser and other government lawmakers.

“It was agreed that a committee consisting of members of both houses would be constituted to work on various issues related to #electric reform,” the statement said.

There is strong resistance from the opposition.

However, the opposition has continued to strongly oppose the government’s proposed reforms, especially the EVM.

PDM chief Fazal also called the EVM “the easiest way to rig” in August as the coalition rejected the government’s “unilateral” electoral reforms.

“We reject every electoral reform proposed by this elected government, and we believe that the NAB and the FIA ​​have become political institutions that have lost their position,” he told a news conference. Yes, because they are being used against the opposition. ” In Islamabad

Meanwhile, the ECP said on September 10 that EVM could open up the possibility of “more complex fraud” through software and hardware manipulation.

The EVM is being touted as a solution to electoral fraud, but it cannot “fight all forms of fraud,” the ECP told Chairman Senate Standing Committee on Parliamentary Affairs Taj Haider on Friday, September 9. Said in a 34-point letter sent.

The ECP said “there would be a lack of evidence in the event of an electoral dispute”, as it stressed that the EVM’s compatibility with the current constitutional and legal framework should be considered.