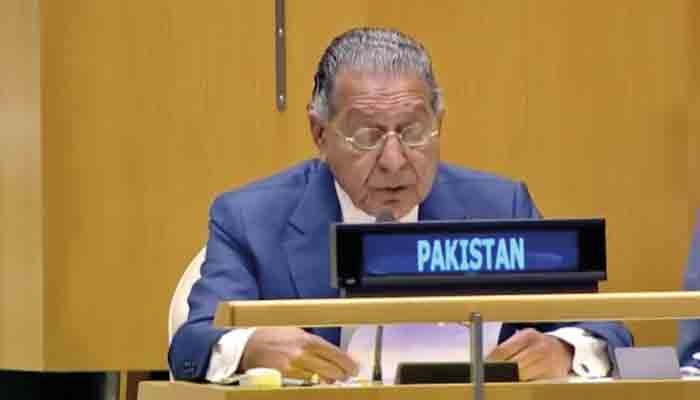 ISLAMABAD: Pakistan’s Permanent Representative to the United Nations Munir Akram on Monday said that peace and stability in South Asia is linked to the resolution of disputes between Pakistan and India.

Addressing the first committee of the UN General Assembly’s General Debate on Arms and International Security, Munir Akram called on India’s Hindutva government to implement a “final solution” in occupied Kashmir. He drew the world’s attention to the emerging threat to international peace and security. .

He said that Pakistan would safeguard its full spectrum deterrence to counter any possible Indian aggression.

Munir Akram said the actions of the “fascist” government were in violation of Security Council resolutions calling for a referendum to enable the Kashmiri people to exercise their right to self-determination.

“It [India] The Kashmiri people have started a brutal reign of terror and oppression against the youth, women and citizens and against its own 200 million Muslim minority. Pakistan and other neighbors.

“To cover up his crimes, he has resorted to the world’s most notorious misinformation campaign,” he added.

Noting that India’s repressive policies are accompanied by regional domination and “great power” status, despite its domestic political and economic turmoil, Ambassador Akram briefed the committee on its large-scale militarization. He said that he spent 73 73 billion last year. Conventional and non-conventional land, air and naval weapons systems

He said India has nuclearized the Indian Ocean, deployed anti-ballistic missile systems, acquired anti-satellite weapons, and increased the range and sophistication of all its delivery systems.

“The states that provide India with this advanced weapons system and technology should know that 70 per cent of India’s weapons and forces are deployed against Pakistan, not to compete with the so-called emerging Asian superpower. In order to live up to its promise, the Indo-Pacific region and India have put into practice their dangerous ideology of pre-emptive aggression against Pakistan.

Ambassador Akram announced, “Pakistan will do everything in its power to prevent and defeat any possible Indian aggression to protect full spectrum deterrence.”

“Pakistan’s proposal for a strategic restraint government in South Asia is on the table,” the Pakistani diplomat said.