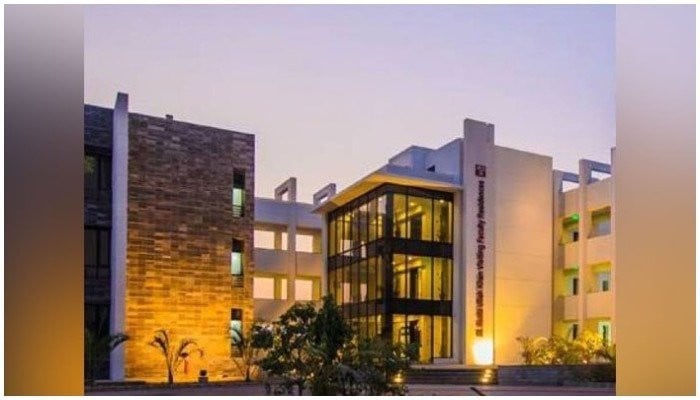 The Institute of Business Administration (IBA), Karachi, announced on Tuesday that it has decided to reinstate a student expelled from the university for highlighting the alleged harassment on campus.

An IBA spokesman said the announcement was made after the university’s disciplinary committee considered the matter when the student was met.

The meeting took place on the morning of October 5, during which the university’s executive director heard the student’s appeal against the disciplinary committee’s decision to expel him on September 29.

During the hearing, student Muhammad Jibril reaffirmed his respect for the IBA and the Executive Director and his commitment to the institution.

The spokesman said he also withdrew parts of his appeal that were not related to his deportation.

After hearing the appeal, the executive director immediately made Gabriel an IBA student.

The spokesperson added, “IBA is engaged in a responsible, healthy and constructive dialogue with all stakeholders, including students, with the aim of taking the organization to new heights.”

It may be recalled that IBA Karachi had on September 29 expelled Jibril from the institute as a result of disciplinary action after exposing the alleged case of harassment on its social media account.

The university issued a statement after the student’s expulsion, saying the decision was made by the IBA’s disciplinary committee “to ensure the safety of students” and to address their concerns in a timely manner.

The IBA is an institution known for its disciplinary principles, policies, and IBA Code of Conduct, which apply to all faculty members, staff, and students. With multiple platforms for registering your complaints.

In the statement, the university added that in the past, “all issues raised on any platform have been resolved in accordance with the rules and regulations of competent authorities”.

The statement said the student had posted details of the alleged harassment on social media “without the standard operating procedures (SOPs) that are followed at the IBA” committees. Or offices.

“It is against IBA rules and regulations to share details of an alleged incident on any public platform without full knowledge of the context,” the statement said.

The university said in a statement that the student “reported defamation of the institute, its finance department and the employee, including senior professors from the national institution.”

According to the IBA, the student’s action “provokes the students. [stage] Protest and demonstrate against the institute and pit the students and the IBA administration against each other, which could endanger the safety of the protesters and the administration.

The IBA alleges that the student “endangered the physical and psychological safety of other students, staff and faculty members with the protest” and “sought to influence the decisions of the relevant committees, which Are independent and impartial, with the aim of achieving the desired outcome by publishing a chain of communication and events outside the IBA and spreading false information and distorting the facts. “

On August 5, Gabriel wrote on his Facebook account: “A few days ago, I visited the IBA’s finance department and saw before my eyes a very disgusting and disgusting incident and it was an eye-opening unfortunate incident. There was a lot of dirt in our society.

He explained that the incident was harassment at work, which he saw in the university’s finance department, where a man shouted and mocked a female employee. He added that he was outraged by what he saw and wanted to report it to the university’s harassment committee but was unable to do so due to some registration and financial issues.

Gabriel added: “As a citizen of this country, it is my duty to report this ugliness of society whenever I see it, no matter who it is.”