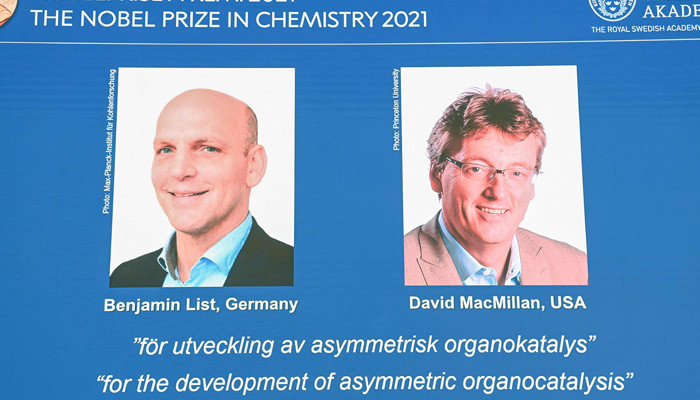 Germany’s Benjamin List and US-based David Macmillan won the Nobel Prize for Chemicals on Wednesday for developing a tool to create molecules that have made chemistry more environmentally friendly.

Their device, which they developed independently of each other in 2000, can be used to control and accelerate chemical reactions, which has a major impact on drug research.

Prior to their work, scientists thought there were only two types of catalysts – metals and yeast.

The new technique, which relies on small organic molecules and is called “asymmetric organotalysis”, is widely used in pharmaceuticals to help pharmaceuticals produce drugs for depression and respiratory infections. Allowed.

The Nobel Committee of the Royal Swedish Academy of Sciences stated that organocatalysts allow multiple steps in a production process to be performed in an uninterrupted order, which greatly reduces waste in chemical manufacturing.

“I thought someone was joking. I was having breakfast with my wife,” List told reporters by telephone during a press conference after the award was announced.

In recent years, he has said that his wife has joked that he should keep an eye on his phone for calls from Sweden.

“We didn’t even joke today,” said List, director of the Max Planck Institute in Germany.

“It’s hard to describe how you feel at this moment, but it was a very special moment that I will never forget.”

When asked what the award would mean for his future as a researcher, List promised that he had “some more plans.”

“I always like to go to extremes. ‘Can we do things that were previously impossible?’ “I hope I can stick to that identity and keep discovering amazing things,” List told reporters.

Macmillan, who was born in Scotland but was a professor at Princeton University in the United States, also thought he was a joke, saying he actually fell asleep when he began receiving texts from Sweden.

“I am shocked, stunned and very happy,” McMillan said in a statement from Princeton University.

“Organotalysis was a very simple idea that really led to a lot of different research,” the professor added.

“The part we’re very proud of is that you don’t need a lot of equipment and a lot of money to do great work in chemistry.”

Explaining the award, the academy said: “Many research fields and industries rely on the ability of chemists to build molecules that can make flexible and durable materials, store energy in batteries or prevent disease progression. ۔ “

“This work requires catalysts, which are substances that control and accelerate the chemical reaction without being part of the final product,” he added.

The list first proves that the amino acid “propylene”, which he calls his favorite catalyst, can induce an aldole reaction, which occurs when carbon atoms from two different molecules bind together.

“Compared to both metals and enzymes, propylene is a dream device for chemists. It is a very simple, inexpensive and environmentally friendly molecule,” the academy said.

The science institute notes that since their discovery, advances in the field can be “almost likened to a gold rush,” with the list and MacMillan’s design of “cheap and stable organocatalysts.” Too many “.

For example, in 2011, researchers were able to create a production process for strychnine, which is widely used today as a pesticide, 7,000 times more efficient, with only 12 of 29 chemical reactions.

Prior to Wednesday’s announcement, analysts said the field of chemistry was wide open.

According to Clarivate, who lists potential Nobel Prize winners, given the thousands of references he has received in scientific papers, more than 70 researchers needed to consider the prize.

The two most closely watched Nobel Prizes, Literature on Thursday and Peace on Friday, continue. The winner of the Economics Prize will be announced on Monday.

The Madison Prize kicked off the 2021 Nobel season on Monday, with David Julius and Ardim Patapotin going for success that paved the way for the treatment of chronic pain.

The physics prize came after Tuesday, when half of the American Japanese scientists Seokoro Manabe and Klaus Hasselmann were awarded for climate models, and the other half of Italy’s Giorgio Percy for working on the principle of random materials and random processes. Given on