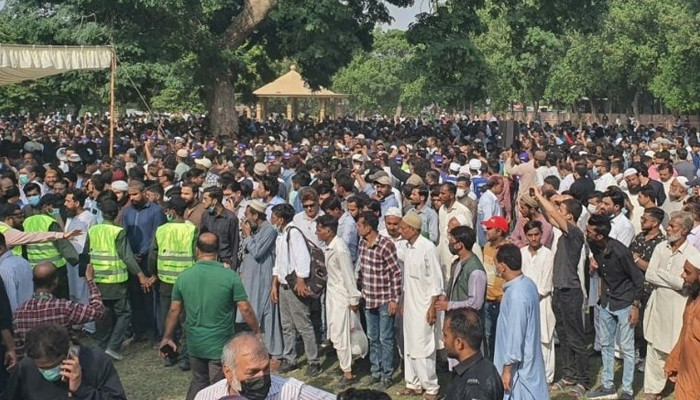 Before the funeral, hundreds of people attended the comedian’s funeral prayers in a park in the Clifton area of ​​Karachi.

SSP South confirmed. Geo News. More than 200 police officers were deployed at the funeral for security under the supervision of two DSPs.

He said that police had installed a walk-through gate at the entrance of Omar Sharif Park in Clifton Block II. The ground outside the park’s main gate was designated as a parking area for funeral prayers, while traffic police personnel were deployed outside the park to ensure uninterrupted flow of traffic.

The bomb disposal squad also searched the park before the funeral prayers.

Earlier, Omar’s body was taken from the morgue to his home in Karachi on Wednesday morning for his last rites.

Turkish Airlines Flight TK-708, carrying the body of “Comedy King”, left Istanbul at 12:53 a.m. and landed at Jinnah International Airport in Karachi at about 5:33 a.m. today.

Omar Sharif’s wife Zarin Ghazal also returned to Pakistan on the same plane. His sons and other relatives received his body at the airport. Among others, PPP leader Saeed Ghani and MQM’s Kishore Zahra also arrived at the airport’s cargo terminal.

The body of the deceased comedian was flown from Nuremberg, Germany to Munich, before being flown to Istanbul on Turkish Air flight TK-1634.

The PPP leader paid tribute to the humorous genius. Talking to media, Ghani said, “I urge people to attend the last rites of Omar Sharif in large numbers so that there is a message to the whole world that Pakistanis will remember his legends even after his death.” Are. ”

Later, his body – wrapped in the green flag of Pakistan – was shifted from the airport to Edhi Marg, Sohrab Goth. Her fans showered her body with rose petals.

A large number of people also gathered at Omar Sharif’s residence in Gulshan-e-Iqbal to offer condolences to the bereaved family.

Omar Sharif was admitted to a hospital in Nuremberg, Germany, on Wednesday after his condition deteriorated. He was taken to hospital after his air ambulance made a scheduled landing in Germany.

The comedian suffered from a number of ailments, including coronary heart disease.

Three days after his stay in Germany, he was expected to resume his trip to the United States for treatment. However, a few hours after his dialysis, he suffered a heart attack that killed him.

Omar Sharif was 66 years old at the time of his death. Her doctor and husband of former Pakistani actress Reema Khan, Dr. Tariq Shehab, said the comedian was feeling well during his dialysis.

Sharif was born on April 19, 1955 in Liaquatabad, Karachi to an Urdu-speaking family. The star was one of the greatest comedians in Asia.