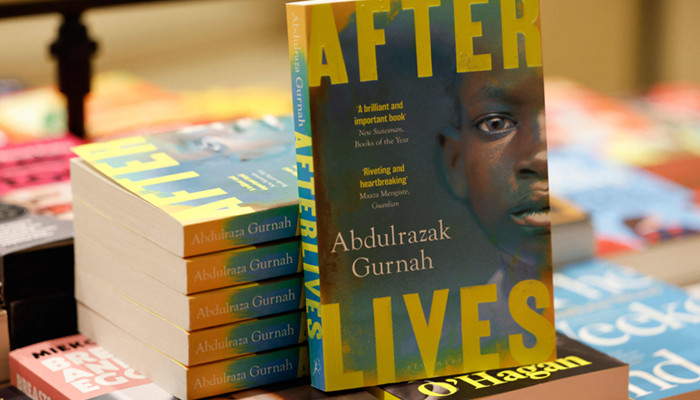 STOCKHOLM: Tanzanian-born novelist Abdul Raziq Garnah won the Nobel Prize for Literature on Thursday for his novels exposing the effects of colonialism and the trauma of the refugee experience.

Garna, 72, who grew up on the island of Zanzibar but arrived in England as a refugee in the late 1960s to escape the revolution, is the fifth African to win the Nobel Prize for Literature.

The Swedish Academy said Gerna was honored for “the uncompromising and sympathetic intervention of the effects of colonialism and the fate of refugees in the gulf between civilizations and continents.”

The head of the Academy’s Nobel Committee, Anders Olson, said his writings were particularly echoed by the fact that a record 82 million people were fleeing war, oppression and violence in 2020.

Gorna told the Nobel Prize website that he was stunned to receive a call from the Swedish Academy.

“I thought it was a joke,” he said. “These things usually float weeks in advance … so it wasn’t something I had in mind,” he said.

He published 10 novels and several stories.

“His writings are still very, very interesting to many people in Europe and around the world,” Olson told reporters.

“In all its work, Garna has tried to avoid all sorts of nostalgia for colonial Africa more than ever before,” the academy said.

Its traveling characters “find a gap between cultures and continents, between a life and an emerging life. It is an insecure situation that can never be solved.”

The publisher never expected that

The theme of the refugee barrier runs throughout his work, focusing on his identity and self-image, as well as in the 1996 novel “Admiring Silence” and the 2001 “By DC”.

Tanzania on Thursday hailed its victory as a “victory” for the country and the African continent.

“You have certainly done justice to your profession, your victory is for Tanzania and Africa,” the government’s chief spokesman said on Twitter.

After his victory, Guerna called on Europe to view African refugees as people who “come out of necessity” and who “clearly … have something to give.”

“They don’t come empty-handed. Lots of talented, energetic people who have something to give,” Gorna told the Noble Foundation in an interview.

The announcement also made Gorna’s Swedish publisher a protector.

Heinrich Selender told the Swedish news agency TT, “I once heard someone suggest that his books are of Nobel standard.

Born in 1948, Garna fled Zanzibar in 1968 after a revolution there that persecuted and persecuted citizens of Arab descent.

He started writing in England at the age of 21. Although Swahili was his first language, English became his literary medium.

Garna is best known for his successful 1994 novel “Paradise”, which was compiled during World War I in colonial East Africa and was shortlisted for the Booker Prize for Fiction.

The novel makes a clear reference to the famous 1902 novel “Heart of Darkness” by English author Joseph Conrad, which depicts the journey of the innocent young hero Joseph to Central Africa and the Congo Basin.

Author Adam Shafi Adam, from Zanzibar, said. AFP It was great news for a Tanzanian to win the Nobel Prize in Literature … one of the most prestigious prizes in the world.

His books “paint a good picture of the East African coast during the colonial era and what it was like in Zanzibar after the revolution.”

Until his recent retirement, Garna has been Professor of English and Post-Colonial Literature at the University of Kent in Canterbury, focusing primarily on authors such as Voll Swainka, Ngogi Wa Theungo and Salman Rushdie.

The Nobel Prize comes with a medal and 10 million Swedish kronor (approximately 1. 1.1 million).

Last year, the award was given to the American poet Louis Gulak.

Prior to Thursday’s announcement, Nobel laureates had suggested that the Swedish Academy could choose to approve an author from Asia or Africa after pledging to further diversify the prize in gender and geography.

In its 120 years of existence, it has crowned mainly Westerners.

“Before, we had a more Eurocentric view of literature, and now we’re looking at the whole world,” Olson, head of the Nobel Committee, said in 2019.

But at the end of the day, “literary merit” is still the “absolute and sole criterion,” he said in an interview with The New Republic, published this week.

The Nobel Peace Prize continues in Oslo on Friday, followed by the Economics Prize on Monday.