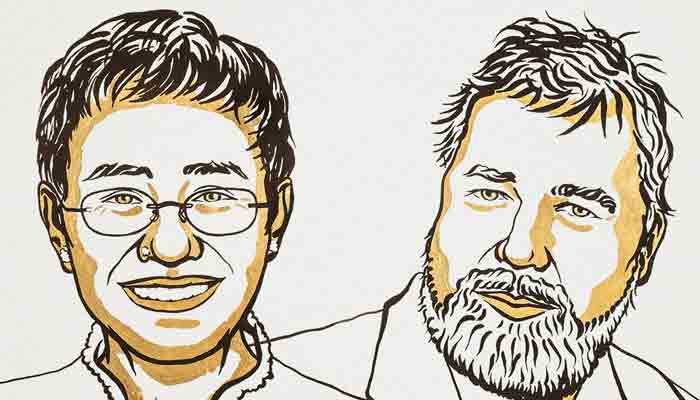 OSLO: The Nobel Peace Prize was awarded Friday to Philippine journalists Maria Risa and Russia’s Dmitry Maratov for their fight for freedom of expression in their countries.

Brett Reiss Anderson, chairwoman of the Norwegian Nobel Committee, said the couple was honored for their efforts to protect freedom of expression, a condition of democracy and lasting peace.

“He represents all journalists who stand for the ideal in a world where democracy and freedom of the press are facing increasingly negative conditions,” he said.

In 2012, Risa, 58, co-founded the digital media company Repeller, which he still heads, for investigative journalism.

Maratov, 59, has defended freedom of expression in Russia for decades.

In 1993, he was one of the founders of the independent newspaper Novaya Gazeta, which has a “fundamentally critical attitude,” the committee said, and has been its editor-in-chief since 1995.

“Without freedom of expression and freedom of the press, it will be difficult to successfully promote brotherhood among nations, disarm and achieve a better world order in our time,” Anderson said.

India tests Agni 5 ballistic missile with a range of 5,000 km.

The world faces a growing threat of ‘unbearable’ heatwaves.