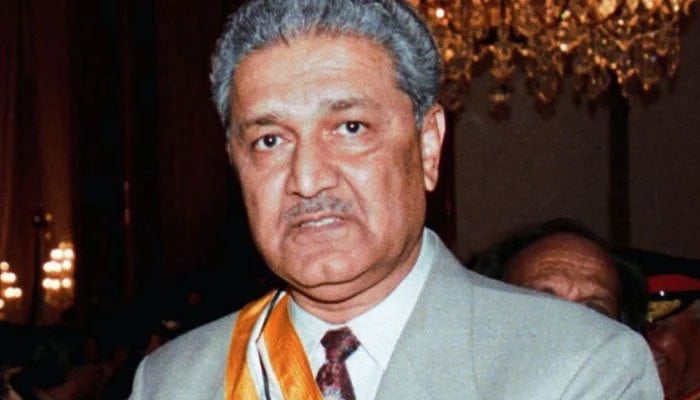 His funeral prayers were offered earlier on Sunday at the Faisal Mosque in Islamabad.

Despite the rain, a large number of people attended, which began shortly before prayers, at 3:30 p.m.

Two separate walls were erected around the mosque compound, one of which was clearly provided for the general public.

Dr. Abdul Qadeer Khan, the father of Pakistan’s nuclear program, began to deteriorate on Saturday night, after which he was rushed to RL Hospital in an ambulance at 6:00 a.m. on Sunday.

Sources said that the nuclear scientist had difficulty in breathing after which he was brought to the hospital. However, his health worsened when he started bleeding from his lungs.

Doctors tried their best to save the life of the famous scientist but he was unable to do so and he died at 7:04 in the morning. Doctors have said that Dr Abdul Qadeer Khan died due to a broken lung.

Talking to Geo News, Interior Minister Sheikh Rashid said that Dr AQ Khan would be buried in H-8 Cemetery, according to his family as well as his own wishes.

Rashid confirmed that the government would pay homage to the scientist in recognition of his services to Pakistan.

The Home Minister said that Dr. Abdul Qadeer Khan helped him a lot in his educational activities, adding that he was a visionary leader at a time when Pakistan was going through a sensitive period.

Rashid said that he is really a benefactor of Pakistan.

Speaking at a press briefing later, the minister said that Prime Minister Imran Khan had directed all members of the cabinet to attend the last rites of Dr Abdul Qadeer Khan.

Replying to a question, he said that the funeral would be held at Shah Faisal Mosque at 3.30 pm, adding that the public would be allowed to attend.

Dr. Khan serves the country with dignity and hard work

The minister stressed that “he was a great scientist. He served his country and served it with dignity and hard work.” “The whole country respects him and he will be buried with honors at 3:30 pm today.”

He told the media that security has been placed on high alert for the funeral.

Dr. Abdul Qadeer Khan became a national hero overnight, not only in Pakistan but also in the Islamic world, when in May 1998, Pakistan conducted its own nuclear test and gave India an appropriate response.

After the experiments, Pakistan became the only nuclear power in the Muslim world and the seventh country to have nuclear weapons. Pakistan’s nuclear weapons have stopped Indian aggression.

“Dr. AQ Khan’s demise was deeply saddening. He was loved by our nation because of his significant contribution to making us a nuclear weapons state. He protected us against an aggressive, large nuclear neighbor. He is a national icon for the people of Pakistan, “he tweeted.

Federal Minister for Planning and Development Asad Umar heard the news of Dr Abdul Qadeer Khan’s demise and prayed for his soul.

He paid tribute to the nuclear scientist by saying that he had played a key role in making Pakistan invincible.

Defense Minister Pervez Khattak said he was saddened by the news of Dr Abdul Qadeer Khan’s death, adding that “Pakistan will always respect his services to the nation”.

He tweeted, “Saddened to learn of Dr. Abdul Qadeer Khan’s death. He was a pioneer of Pakistan’s nuclear program and contributed immensely to our security. His soul was relieved.”

Federal Minister for Information Fawad Chaudhry said that the death of Dr Abdul Qadeer Khan was a loss to the nation.

Islamic scholar Maulana Tariq Jameel prayed for the soul of the deceased and appreciated his services to Pakistan.

He tweeted that Dr Abdul Qadeer Khan was a valuable asset to Pakistan. He played a key role in making Pakistan a nuclear power.

He was among those who migrated to Pakistan with his family in 1947.

Khan is widely regarded as the “father of the Islamic atomic bomb” or the founder of gas centrifuge enrichment technology for Pakistan’s nuclear prevention program as he developed the Muslim world’s first atomic bomb.

He received an engineering degree from a university in the Netherlands in 1967 and later a doctorate in metallurgical engineering from Belgium.

Dr. Khan was the first Pakistani to be awarded three Presidential Medals. He has twice been awarded the Order of Excellence and once the Crescent of Excellence.