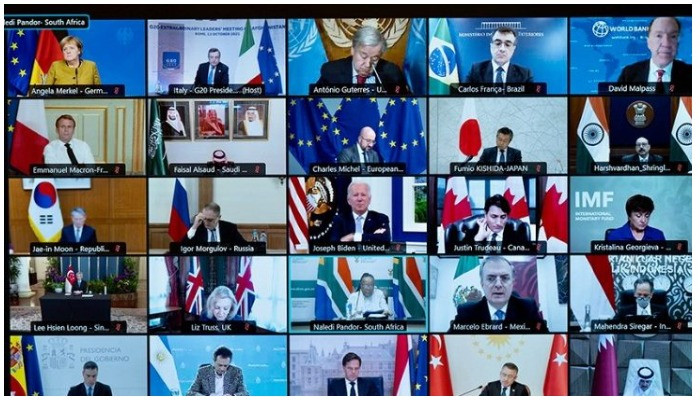 ROME: G20 leaders have agreed to work together to avert a humanitarian catastrophe in Afghanistan, as the European Union pledges a ارب 1 billion aid package and Italy stresses the need to maintain contact with the Taliban. Is.

As the Taliban held face-to-face talks with the US and EU delegations for the first time, US President Joe Biden, Turkey’s Recep Tayyip Erdogan and India’s Narendra Modi held a virtual summit on the economic and humanitarian crises arising from the group’s return. I attended. Towards power.

The European Union began negotiations with a pledge of one billion euros (2 1.2 billion), including money for urgent humanitarian needs and Afghanistan’s neighbors who were taking Afghans fleeing the Taliban.

Draghi, who has been pushing for a Group of 20 meeting since the Taliban took control of Afghanistan in August, insisted that the solution should be discussed outside the usual Western ally’s club.

Chinese President Xi Jinping and Russian President Vladimir Putin did not attend instead of sending envoys, but Draghi insisted they all agreed on the need for more help.

Instead of responding and arguing, they have now made us aware of the emergency and the great responsibilities of the G20 to the Afghan people.

International aid to Afghanistan has been cut off since the Taliban came to power following the withdrawal of US and other international troops after a 20-year war.

Overseas property assets have been frozen, while food prices and unemployment are rising, warning of a catastrophic winter.

German Chancellor Angela Merkel told reporters that “seeing 40 million people drowning in chaos because electricity cannot be provided and there is no financial system, it cannot and should not be a target of the international community.” “

The United Nations and Qatar, a key broker in Afghanistan that has also hosted talks between the United States and the Taliban, were also invited to the closed-door talks on Tuesday.

The European Union insisted that the money would go to international organizations working on the ground instead of the Taliban’s interim government, which has not yet been recognized by any other government.

However, Dragi said the Taliban were crucial to getting help, adding: “It is difficult to see how one can help the Afghan government.

According to a briefing published by Draghi’s office, the G20 leaders stressed the importance of respecting human rights and fundamental freedoms, especially the rights of women and minorities.

He also addressed the issue of security, saying the Taliban themselves are threatened by ISIS Khurasan, which has launched a series of deadly attacks.

“Afghanistan should not be a safe haven for terrorists and a threat to international security,” the briefing note said.

The White House statement added that the leaders “discussed the critical need to maintain our laser focus on our sustained counterterrorism efforts, including the threat posed by ISIS.”

Turkey’s Erdogan told G20 leaders in a televised address that the Taliban had “not yet delivered what was expected”.

“We have not seen their necessary involvement in humanitarian aid, security and making Afghanistan a base for terrorist organizations and preventing extremism.”