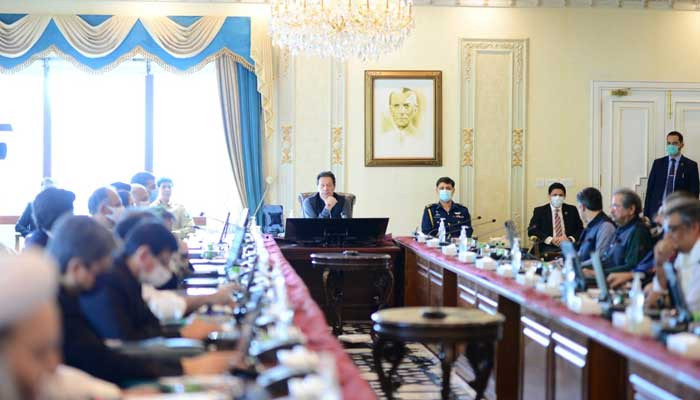 Sources told Geo News that Prime Minister Imran Khan on Tuesday said that the government and the army were “on the same page” on the appointment of the Director General of Inter-Services Intelligence (ISI).

His remarks came during a meeting of the federal cabinet during which the issue of appointment came up.

According to sources, the Prime Minister took the cabinet members into confidence on the issue.

He said that the Prime Minister had told him that an attempt had been made to misrepresent the issue in the media.

Prime Minister Imran Khan assured the cabinet that all concerned were “on the same page” and that the appointment would be finalized “in a friendly manner”.

‘Ideal relationship between government and army’

Later, addressing a post-cabinet press briefing in Islamabad, Federal Minister for Information and Broadcasting Fawad Chaudhry confirmed that the appointment of Director General of Inter-Services Intelligence (DG ISI) was also discussed during the meeting. .

“There was a long meeting between Prime Minister Imran Khan and the Army Chief last night,” Chaudhry said.

The Information Minister said that the Prime Minister and the Army Chief have good relations and both sides are on the same page regarding the appointment of DG ISI.

“Any appointments we make are made after consultation, and we always meet all legal requirements. […] The new DG ISI will also be appointed after fulfilling all the legal issues.

Meanwhile, the director of news. Geo News. Rana Jawad said that speculation was on the rise on social media after the Prime Minister did not issue a notification for the appointment of DG ISI, which gave the impression that differences between the Chief of Army Staff and the Prime Minister’s Office Are

The senior journalist said that the 90-minute meeting between the Prime Minister and Army Chief General Qamar Javed Bajwa would now put an end to such speculations.

Jawad added that Chaudhry made it clear that the matter would be resolved in the coming days.

Due to speculation, market signals were disappointing, the stock market was affected, and the issue was hotly debated in political circles, the senior journalist said.

He noted that the Minister of Information had resolved the speculations and called them “false”, and that the Prime Minister would not take any action without consulting the Army.