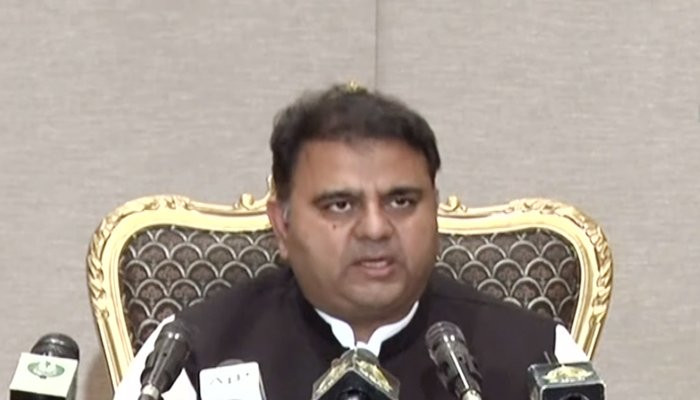 ISLAMABAD: Federal Minister for Information and Broadcasting Fawad Chaudhry on Tuesday said that the voting rights of Pakistanis abroad have always been on the agenda of the PTI-led government in cabinet meetings.

Speaking at a post-cabinet press conference in Islamabad, the minister said that electoral reforms, the issue of electronic voting machine (EVM), and other issues including voting rights of Pakistanis abroad were under discussion during the cabinet meeting. Came . The meeting was chaired by Prime Minister Imran Khan.

He said that the government has also approved the facility of providing online power of attorney to Pakistanis abroad.

Fawad also spoke about the country’s economic affairs and said that Finance Minister Shaukat Tareen was in talks with the International Monetary Fund (IMF).

He said that Tarin is currently in the United States to talk to the IMF and he will continue to perform his duties in accordance with the law and the constitution of Pakistan.

Highlighting the issue of Afghanistan, the Information Minister said that the government has decided not to charge visa fees to Afghan citizens.

“We have also decided to issue business visas to Afghan businessmen,” he said.

On the issue of Balochistan, the Federal Minister said that the government wanted peace and stability in the province.

He said that the Governor of Balochistan had apprised the Prime Minister about the political situation there.

The minister also spoke about the establishment of the Rehmat-ul-Ulameen Authority and said that the government intends to include some foreign Islamic scholars besides locals in the board.

He said that the government has approved the formation of PEMRA Council of Grievances in Islamabad and thanked the electronic media of Pakistan for its serious reporting on the issue of national security and appointment of DG ISI. ۔

The Federal Minister said that the issue of appointment of Director General of Inter Services Intelligence (DG ISI) was also discussed during the meeting.

“There was a long meeting between Prime Minister Imran Khan and the army chief last night,” Fawad said, adding that the government had “an ideal relationship with the army”.

Fawad said that the Prime Minister has a very close relationship with the Army Chief. The Prime Minister’s Office will never take a step that would tarnish the army’s image.

He said that the government would adopt legal procedure for the appointment of DG ISI and ensure that all the constitutional requirements in this regard were met.

He said that the appointment of DG ISI was the prerogative of the Prime Minister.