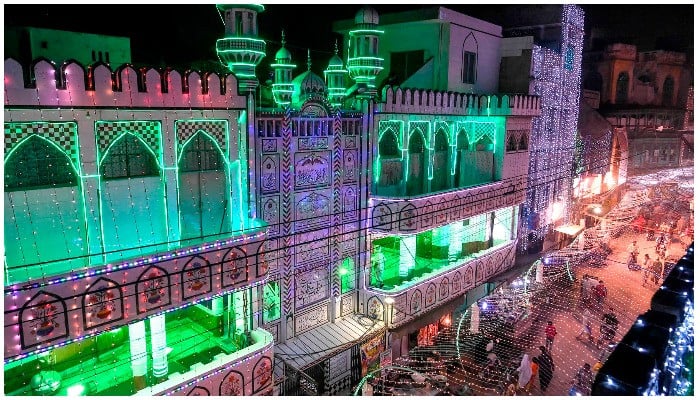 KARACHI: The Sindh government on October 19 issued a notification of a public holiday on the occasion of Eid Milad-un-Nabi.

Pakistan had seen the moon of Rabi-ul-Awal on October 7.

On Monday, the government banned double riding in the province on the occasion of Eid Milad-un-Nabi (SAW) under security arrangements.

According to a notification issued by the Home Department, double riding has been banned in all cities on October 19.

“Against the backdrop of numerous warnings of disturbance of law and order during various events of Rabi-ul-Awal, double riding on a motorcycle for one day on 12 Rabi-ul-Awal 1443 AH, i.e. October 19, is banned under Section 144 Cr.PC Need to impose, 2021, “read the notification.

The Home Department added that the ban would not be conditional on women, children under the age of 12, senior citizens, law enforcement / security agency personnel in uniform, employees of essential services and journalists showing their press cards. Service card

Prime Minister Imran Khan on Sunday inaugurated the official celebrations of the month of Rabi-ul-Awal with a special message for Pakistani youth and said that the countries where the rule of law is highest are committed to development.

Addressing the Rehmat-ul-Ulameen Conference in Islamabad, the Prime Minister had said that societies facing moral decay were unable to move towards progress.

The conference was attended by government officials, members of civil society, journalists and members of minority communities. Federal Minister for Science and Technology Shibli Faraz, Minister for Information and Broadcasting Fawad Chaudhry and Minister for Education and Vocational Development Shafqat Mahmood were also present.

Prime Minister Imran Khan also announced the establishment of Rehmat-ul-Ulameen Authority in the country to ensure implementation of the teachings of the Holy Prophet (SAW) in the society.

Imran Khan had said that the authority would monitor the curriculum taught in schools and conduct research on the true message of Islam in universities. He stressed the need to do research on Muslim heroes.

The Prime Minister had said that a cartoon series would be made to introduce Islamic culture to our children. “Islam has its own cultural values ​​that our children need to learn so that they can be protected from evils such as sex crimes,” he said.