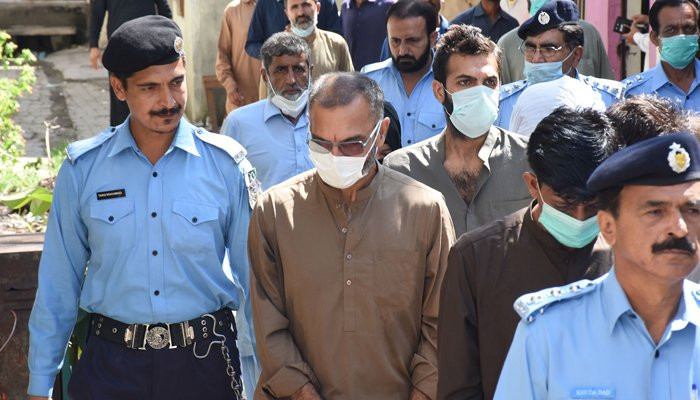 The Islamabad High Court on Thursday formally convicted Zahoor Jaffar – the main accused in the Noor Muqaddam murder case – and 11 others.

Jamil and Jan Mohammad, two employees of the accused’s family, and Tahir Zahoor, the chief executive officer of Therapy Works, and 11 other accused were indicted.

Six of the 12 accused by Additional Sessions Court Judge Ata Rabbani were brought to the court from Adiala Jail in Rawalpindi, while six others had earlier been granted bail by the court. All the accused pleaded not guilty to the charges.

During the hearing, Zahir’s parents’ lawyer Advocate Rizwan Abbasi said that the evidence presented in the court had nothing to do with Zakir Jaffer, so he could not be charged in the murder case.

In response, Shokar Madam’s lawyer, Noor Makadam’s father, said the evidence could be examined during the trial.

“The accused is being charged, but he has not yet been convicted,” the lawyer said.

During the trial, Zahir issued remarks, saying that the therapy workers had forced their way into the house.

“My life is in danger, please have mercy on me,” Zahir told Shaukat Makadam.

Concluding the proceedings, the court summoned the prosecution witnesses on October 20, directing them to start the trial immediately and complete it within two months.

Noor Makadam, a 27-year-old woman, was raped and killed with a sharp instrument July 20 inside the Kohsar police station in Islamabad. The murder case was later registered by Noor’s father, former Pakistani ambassador Shaukat Ali Muqaddam.

Zahir Noor is the main accused in Muqaddam’s murder case. The massacre, in which Makadam was beheaded, took place July 20 in the F-7 area of ​​Islamabad.

Islamabad police arrested Zaheer from his home on the night of July 20, where, according to Noor’s parents, they killed him with a sharp instrument and beheaded him.

The IHC also ordered the trial court to complete the trial in eight weeks. Justice Amir Farooq of the IHC initially gave a brief verdict. A detailed decision was issued later.

Zakir and Ismat had filed a bail application in the Noor murder case stating that they had nothing to do with Noor’s murder, while the police challan presented in the court said that if Zahir’s parents had approached the police. Noor could have been saved if he had been informed in time.

What did the detailed decision of the Islamabad High Court say?

In its detailed decision, the IHC ruled that Zahir Jaffar’s parents had committed the crime of aiding and abetting Noor’s murder.

The court said Zahir’s parents knew that their son had taken Noor hostage and despite this information, they did not share it with the police. The watchman had clearly stated that he had informed Zakir Jafar.

The detailed decision also refers to the decisions of the Supreme Court.

The IHC’s decision states that according to Blake’s dictionary of law, not doing one’s duty is also supportive and encouraging.

The court said Zahir had said in his confessional statement that he had informed his father about Noor. The IHC said it was up to the trial court to decide whether Zahir’s statement was admissible or not.

Zahir’s parents challenged the rejection of IHC’s bail in the Supreme Court.

A petition filed in the Supreme Court by advocate Khawaja Harris on behalf of Zahir’s parents asked whether not reporting the “incident” was an accomplice to the crime.

The text of the petition states that the Islamabad High Court misjudged Section 107 of the Pakistan Penal Code.

The petition further said that there was no evidence that Zahir’s parents knew their son’s intentions and his bail application could not be rejected on the basis of the co-accused’s statement.

The petition said that the full challan of the case has not been submitted to the trial court yet while the High Court went beyond its jurisdiction by directing to complete the trial in two months.

The petition filed in the Supreme Court further said that giving a verdict within two months is against the rights of the accused and the principles of transparent trial.

The petition further said that the police investigation into Noor’s murder was one-sided and not impartial. Defendants will not be able to defend themselves properly in prison, he said, adding that it is very difficult for them to communicate with their lawyers in prison.