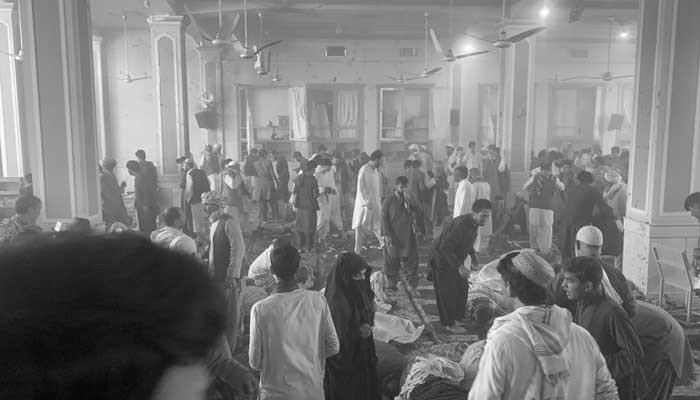 KANDAHAR: A suicide bomber struck a mosque during Friday prayers in the Afghan city of Kandahar, killing at least 33 people and wounding 74 others.

The attack came a week after a suicide bomber struck worshipers at a mosque in the northern city of Kunduz, which ISIS claimed was responsible.

Taliban spokesman Zabihullah Mujahid condemned the attack on Twitter, saying: “The Islamic Emirate condemns the barbaric attack on civilians in a mosque in Kandahar. Let them be brought to justice.”

“The Islamic Emirate extends its deepest condolences to the families of the victims,” ​​he added.

Responsibility for the attack on the Taliban’s spiritual center in Kandahar has not yet been claimed.

“Our initial information indicates that it was a suicide bomber who blew himself up inside the mosque. We have launched an investigation to find out more,” a local Taliban official said. AFP On condition of anonymity

A doctor at the city’s main Mirwais Hospital said. AFPThirty-two bodies and 53 injured people have been brought to our hospital so far.

Other medical sources and a provincial official confirmed the deaths of more than 30 people, and at least 15 ambulances were running to and from the scene.

An eyewitness said. AFP He heard three explosions, one at the main entrance of the mosque, another in the southern area and a third where worshipers wash before prayers.

Another witness said three blasts shook a mosque in the city center during Friday prayers, the busiest week of the week.

Interior Ministry spokesman Qari Syed Khosti tweeted, “We are saddened to learn that an explosion at a Shiite mosque in the first district of Kandahar City has killed and injured many of our compatriots.” Who governs Afghanistan

“Special forces from the Islamic Emirate have arrived in the area to determine the nature of the incident and bring the perpetrators to justice.”

Graphic images posted on social media, which could not be immediately confirmed, showed bodies lying on the floor of the Fatima Mosque.

The group, a fierce rival of the Taliban, has claimed responsibility for attacks on worshipers it considers insane.

But the new Taliban-led government is committed to stabilizing the country and protecting the minorities now living under its rule in the wake of the Kunduz attack.