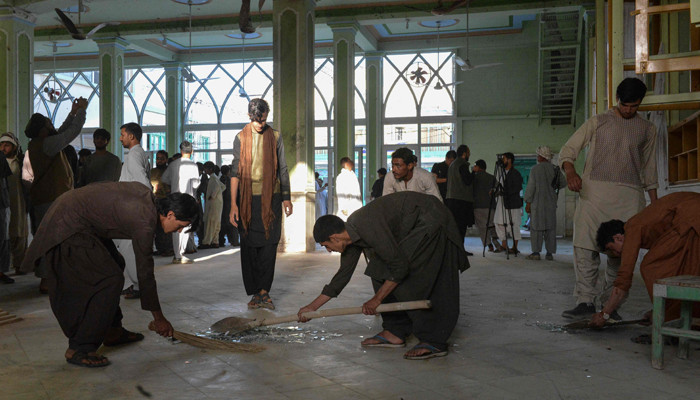 KANDAHAR: ISIS claimed responsibility for a suicide bombing at a Shiite mosque in the southern Afghan city of Kandahar on Saturday that killed at least 41 people and wounded several others.

Friday’s attack came a week after ISIS attacked Shiite worshipers at a mosque in the northern city of Kunduz, killing more than 60 people.

In a statement released on its telegram channels, the group said two ISIS Khurasan suicide bombers attacked separate parts of a mosque in Kandahar – the Taliban’s spiritual center – while worshipers were praying inside.

The UK-based conflict analysis firm ExTrac said Friday’s attack was the first ISIS attack in Kandahar and the fourth major loss of life since the Taliban took control of Kabul.

Extracurricular researcher Abdul Saeed said. AFP The attack “challenged the Taliban’s claim to control the country. If the Taliban cannot save Kandahar from ISIS, how can it protect the rest of the country?”

Inside the mosque, after the blast, the walls were covered with an umbrella and volunteers removed debris from the ornate prayer hall. The wreckage lies in an entrance hall.

In the wake of the blasts, Kandahar Police Chief Maulvi Mahmood said, “A brutal attack on a Shiite mosque has been witnessed, which has resulted in the loss of a large number of our lives.”

In a video statement, Mahmoud said the mosque was guarded by Shiite bodyguards but that the Taliban would take over its security from then on.

Kandahar Health Director Hafiz Abdul Hai Abbas said. AFP According to the hospital, 41 people were killed and about 70 were injured.

At least 15 ambulances were seen running to and from the scene as Taliban security cordoned off the area.

“We are overwhelmed,” said a doctor at the city’s main Mirwais Hospital. AFP.

“A lot of bodies and injured people have been brought to our hospital. We are expecting more to come. We are in dire need of blood. We have asked all the local media in Kandahar to come and donate blood.”

Eyewitnesses said the blasts were accompanied by gunfire, and a security guard assigned to guard the mosque said three of his comrades were shot dead as the bombers fought in their path.

Syed Ruhollah said. AFP“It was Friday prayer time, and while we were preparing, I heard gunshots. Two people had entered the mosque.

He and other eyewitnesses said other bombs exploded in crowded areas outside the main building.

Taliban Interior Ministry spokesman Qari Syed Khosti tweeted, “We are saddened to learn that a blast at a Shiite mosque in the first district of Kandahar City has killed and injured many of our compatriots.”

State Department spokesman Ned Price said Washington had condemned the attack and reiterated its commitment to the Taliban to remain committed to the fight against terrorism, especially the common threat. What is for [Daesh]-of the “

“We are determined that no group can ever use Afghan territory as a launching pad for attacks on the United States or other countries.”

The UN mission in Afghanistan also condemned in a tweet “the latest atrocities targeting a religious institution and worshipers.”

“Those responsible need to be held accountable.”

The new Taliban-led administration is committed to stabilizing the country, and in the wake of the Kunduz attack, has promised to protect the Shiite minority under its rule.

Shiites make up about 10 percent of the Afghan population. Many of them are Hazaras, an ethnic group that has been oppressed in Afghanistan for decades.

In October 2017, an ISIS suicide bomber struck a Shiite mosque west of Kabul, killing 56 people and wounding 55 others.