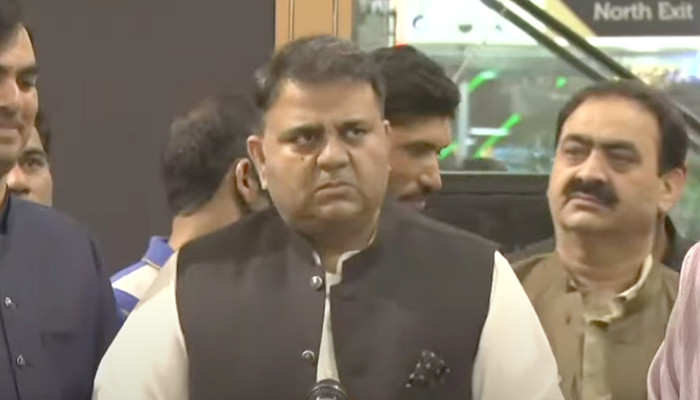 ISLAMABAD: Federal Minister for Information and Broadcasting Fawad Chaudhry on Monday said that before criticizing the opposition parties, the country should take a look at its past and formulate a policy to get it out of trouble.

Speaking to the press, he said: “The opposition has no organizational or economic policy.”

“All issues have been resolved,” he said.

Fawad also spoke on the opposition’s criticism of rising inflation in the country and said that only wheat prices have been increased in Sindh but other essential commodities are being sold at reasonable prices.

“The Sindh government has released wheat in the open market today,” the minister added, adding that the whole world is in the grip of inflation and Pakistan is no exception.

“We don’t live on another planet,” he said. If oil prices rise around the world, we will also see an increase in prices.

“There are no supporters of democracy in the opposition because they always want to make political deals,” he said.

The Information Minister asked the opposition to come up with alternative solutions to curb rising inflation in the country.

Fawad criticized Maulana Fazlur Rehman, head of the Pakistan Democratic Movement, and said that flogging the prime minister alone would not get these parties anywhere.

He said Fazal no longer had a political position. “He only urges madrassa children to join his political rallies, so he should do business on rent.”

Fawad also invited the opposition to come forward and discuss electoral reforms and other issues with the government.

The minister said that to provide relief to the people, the government has decided to subsidize the prices of ghee, wheat and electricity.

However, the entire country cannot be run on subsidies, the information minister added, adding that the government has to repay a debt of ارب 12 billion.

He said that Pakistan would have been in a much better position if those who were rude about inflation had not taken such huge loans. We must fight inflation together and the private sector must increase the salaries of its employees.

Government has taken away people’s right to live: Shahbaz

Earlier in the day, opposition leader in the National Assembly Shahbaz Sharif said the PTI-led government had taken away people’s right to life because it criticized rising inflation.

Addressing the floor of the National Assembly, the opposition leader said: “Every child in the country is witnessing the worst government of the last 74 years.”

He further criticized the economic policies of the PTI-led government and said that there was no comparison between PTI governance and Riyadh Medina.

“[As against present-day Pakistan] Shahbaz Sharif said that during the PTI rule no one ever went to bed hungry in Madinah, ideal justice prevailed there and everyone was given their rights.

Criticizing the government’s economic policies, he said, “It shocks us when the government compares itself to Riyadh in Madinah.”

Criticizing the government for the rise in prices, he said that the price of electricity has been increased by Rs 1.5 per unit, while the prices of petroleum products have also gone up.

Shahbaz said the price of ghee had been increased by Rs. 49 and coking oil by Rs.

The opposition leader asked the government how a person earning Rs 20,000 a month could afford an electricity bill of Rs 10,000, as he had claimed that such a situation had not arisen since the establishment of Pakistan.

He took every step to meet the conditions of the IMF (International Monetary Fund). […] But despite this, I have heard reports that the IMF is still not satisfied and is trying to impose more conditions.

The opposition leader asked if the “catastrophe” would be stopped, as he said the current government wanted to leave the country on the “path of catastrophe”.

Shahbaz reminded Prime Minister Imran Khan that before he came to power, he had said that if the rupee depreciated against the dollar, then the Prime Minister was a thief.

“Imported inflation is leading to hunger and suicide. […] Bad weather can affect the country’s crops, but Pakistan usually has plenty of wheat and other commodities.

The opposition leader added that there were reports of millions of tonnes of sugar being imported by the government, while the people were forced to stand in line to buy commodities.

He added that this government has also deprived the people of wheat.