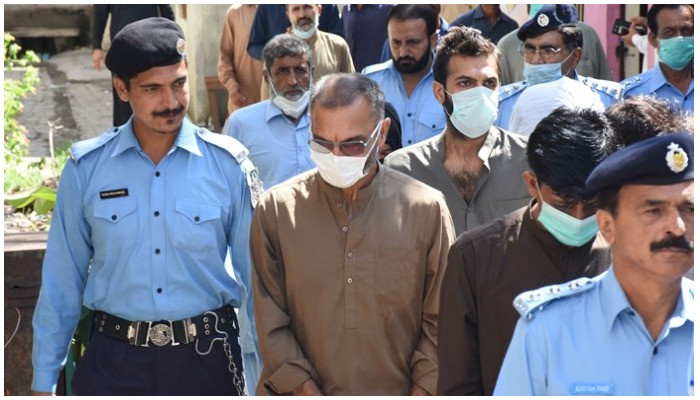 ISLAMABAD: The Supreme Court of Pakistan on Monday rejected the bail plea of ​​Zakir Jaffer, father of Zahir Jaffer, the main accused in the Noor murder case.

However, the apex court accepted a similar petition filed by Zahir’s mother Ismat Adamji and directed her to submit a surety bond of Rs 1 million.

The court observed that rape was not at the scene at the time of the crime.

Co-accused [Zahir’s parents] The Islamabad High Court had rejected his bail pleas in the murder case.

“The Supreme Court of Pakistan will not interfere in the interim order of the Islamabad High Court,” the apex court said.

The Supreme Court rejected Harris’ appeal. He further said that the accused in Noor Muqaddam murder case should be given a fair and transparent trial.

The lawyer representing the parents of Zahir Jaffer, the main accused in the Noor murder case, claimed before the Supreme Court that his clients had been charged only with attempting to cover up the murder.

At the commencement of the hearing, Justice Bandial directed the counsel for the petitioners to discuss the record of telephone call between Zahoor and his parents on the day of murder.

“Applicant [Zahir’s parents] Justice Umar Ata Bandial observed that several calls were made to Zahir on the day of the incident.

Justice Shah remarked that either the father, Zakir Jaffer, incited his son to kill the victim, or forbade him to call.

Khawaja Harris argued that it was also possible that Zahir had not told his father the truth about the murder over the phone.

Discussing the alleged role of infidelity in Noor Muqaddam’s murder, the Islamabad Advocate General said that Zahir’s mother had records of 11 phone calls to her son on the day of the brutal murder.

However, call records have no legal value. [relating to the case]Khawaja Harris said.

Justice Shah remarked that even if the call record is ignored, one wonders why Zakir Jaffer did not tell the police about the murder.

The IHC rejected the bail application of Zahir Jaffer’s parents

The IHC also ordered the trial court to complete the trial in eight weeks. Justice Amir Farooq of the IHC initially gave a brief verdict. A detailed decision was issued later.

Zakir and Ismat had filed bail applications in the case stating that they had nothing to do with Noor’s murder, while the police challan presented in the court said that if Zahir’s parents informed the police in time. By doing so, Noor could have been saved.

The IHC indicted Zahir Jaffer and 11 others in the Nurqadam murder case.

Besides Jaffar, two employees of the family, Jamil and Jan Mohammad, were also indicted along with Tahir Zahoor, chief executive officer of Therapy Works.

Noor Makadam, a 27-year-old woman, was raped and killed with a sharp instrument July 20 inside the Kohsar police station in Islamabad. The murder case was later registered by Noor’s father, former Pakistani ambassador Shaukat Ali Muqaddam.

Zahir is the main accused in the murder case of Jaffar Noor Muqaddam. The massacre, in which Makadam was beheaded, took place July 20 in the F-7 area of ​​Islamabad.

Islamabad police arrested accused Zafar Jaffer from his home on the night of July 20, where, according to Noor’s parents, they killed him with a sharp instrument and beheaded him.