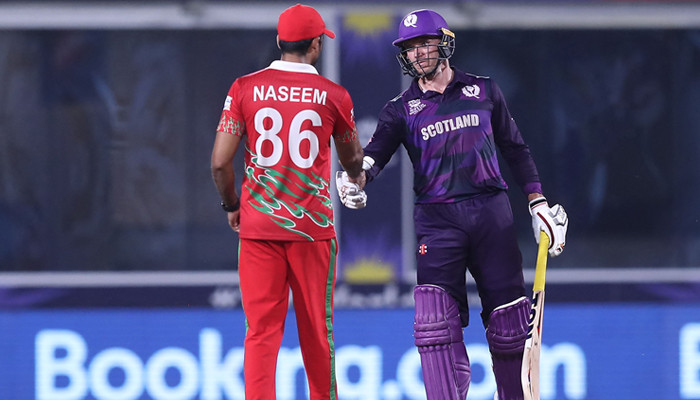 Scotland reached the second round of the T20 World Cup for the first time on Thursday, passing through the “thick and thin”, beating Oman by eight wickets to take all-rounder Shakib Al Hasan to the next round.

The Scots chased down a target of 123 off 18 balls for their third of three wins in qualifying.

Richie Barrington finished the game with a huge six and remained unbeaten on 31. Matthew Cross (26) was also unbeaten.

Scotland will go to Group 2 of the Super 12s with Afghanistan, India, New Zealand, Pakistan and runners-up from Qualifying Group A – possibly Ireland or Namibia.

“This is a great opportunity for Scotland to test themselves against the best,” Kotzer said.

“There is a real unity between our team, through thick and thin.

“This group we were in was just a tough group so the next one will be tough. We will go into every game full of hope and confidence that we can win more games.”

Bangladesh, stunned by Scotland in their opening game, finished second in Group B after beating Papua New Guinea by 84 runs.

They will now play in Group 1 against Australia, England, South Africa, West Indies, perhaps Sri Lanka and Ireland or Namibia.

Man of the match and fast bowler Josh Dewey said: “What a day for Scottish cricket, the boys are buzzing.”

Scotland came into the 2021 tournament, advancing from the first round in the first three rounds to winning just one game in seven.

Oman, who won the toss and elected to bat, got off to a terrible start when Jatinder Singh was run out on the second ball after a run-out mix-up, leaving him and opener Aqib Elias at the same end.

Elias made 37 off 35 balls to top the score but the home side never shook the chains of Scottish bowling.

“I am sorry we could not deliver, but we are confident that our moment will come,” said Oman captain Zeeshan Maqsood.

Chasing 182 for victory, PNG were bowled out for 97 in 19.3 overs and Bangladesh won for the second time in a row.

PNG was eliminated from the tournament with three losses.

The Tigers came back from an early defeat against Scotland with two convincing victories and the final win would have been bigger had it not been for Kaplan Doriga’s unbeaten 46.

Man of the match Shakib said, “Every game we play gives us more confidence. Obviously it was a blow, it was the first game, but in the T20 format the team that gets better in the day wins. ۔ “

Left-arm spinner Shakib hit twice in his first over and then took two more to level Pakistan’s Shahid Afridi as the leading wicket-taker with 39 scallops in the T20 showpiece event.

Earlier, captain Mahmudullah Riaz, who scored 50, and Shakib took Bangladesh to 181-7 after choosing to bat first.

Afif Hussain’s quick fire 21 and Muhammad Saifuddin’s unbeaten 19 off 6 balls, who completed the innings with the help of two sixes and a four, took Bangladesh to the highest score of the tournament so far.

On Friday, 2014 champions Sri Lanka face off against the Netherlands, who are already out, while Ireland and Namibia compete for the last qualifying spot.