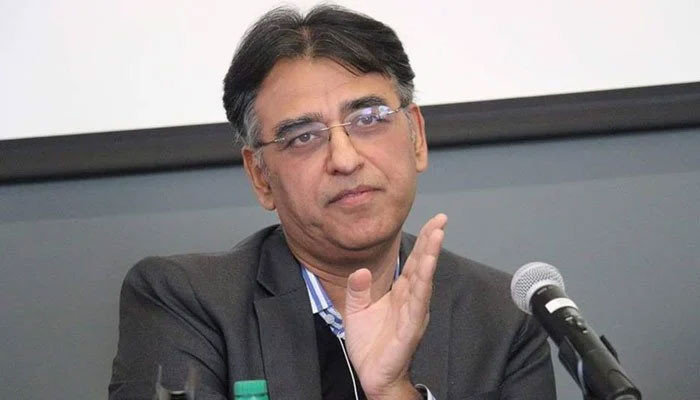 ISLAMABAD: Federal Minister for Planning and Special Measures Asad Umar on Saturday termed the Pakistan Democratic Movement’s (PDM) nationwide protest campaign against inflation as a “storm in a cup of tea”. Given

Addressing a press conference at the Pakistani Embassy in the United States, Asad Umar said that prices of food items and other items have gone up not only in Pakistan but also in other countries.

Reacting to the remarks of various opposition leaders on sending the government home, the PTI leader said that this was the sixth time that he was hearing about sending packaging to the government. In the last three years.

He spoke about the future of the government and said that what Allah has ordained will happen.

Replying to a question, the Federal Minister said that the scope of China-Pakistan Economic Corridor was being widened, adding that some countries did not want to see the project grow.

Highlighting the achievements of the PTI-led government, the minister said that a budget of Rs 800 billion was presented last year, in which Rs 600 billion was allocated for development projects.

Omar said the government was taking steps to accelerate investment in Pakistan to generate employment and other benefits.

Referring to the current humanitarian crisis in Afghanistan, the minister hoped that the world would not repeat the mistakes of the 1990s. He said that if the world did not repeat its mistakes in the war-torn country, the US government would be able to tell its people that its 20-year investment in Afghanistan was not in vain.

In response to another question, Omar said the Taliban had a positive attitude and wanted constructive relations with the world.

Earlier on October 20, PML-N spokesperson Maryam Aurangzeb had vowed that the PDM’s protest against inflation would send packaging to the government.

The PDM staged a protest in Rawalpindi that day, the first leg of its county-wide protest campaign to oust the government.

Addressing the protest, the PML-N spokesperson said, “People are worried about inflation and unemployment, and they have no hope from this government.”

A PML-N spokesman had said that people were “forced to commit suicide” under the current government as they sought the nation’s support to make the opposition coalition’s nationwide protests a success.

“People who are talking about Riyadh Madinah will have to go home.”

The PML-N spokesperson had said that the PDM would not allow Prime Minister Imran Khan to become a ‘political martyr’ and the people were well aware of the country’s political progress.

He said that Imran Khan would have to put Shahbaz Sharif and Nawaz Sharif behind bars to run his government.