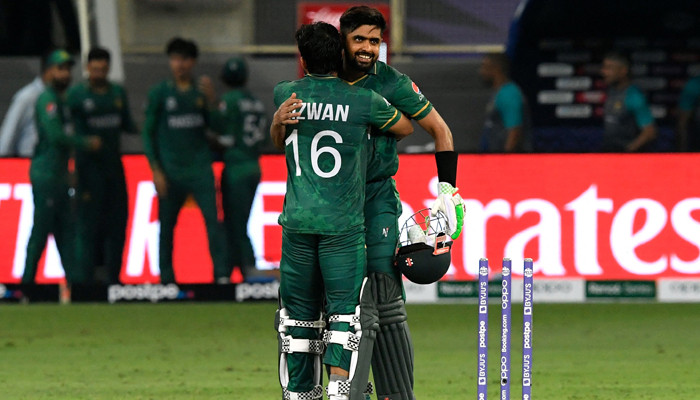 KARACHI: Pakistan captain Babar Azam and wicketkeeper Mohammad Rizwan made the biggest partnership for the T20 World Cup in a thrilling match against India on Sunday.

Salman Butt and Kamran Akmal last contributed the most to the T20 World Cup in 2010. The two together scored 142 runs.

Babar, Rizwan broke the record of Pakistan’s partnership against India.

Pakistan openers Mohammad Rizwan and Babar Azam set the record for Pakistan’s best partnership for any wicket against India in the T20.

The pair reached the match against their rivals during the World Cup match in Dubai on Sunday.

He surpassed the nine-year-old record set by Mohammad Hafeez and Shoaib Malik when they scored 106 for the fourth wicket in Bangalore in 2012.

Meanwhile, Pakistan’s Rizwan also completed 1500 T20 runs in the current calendar year. He is the second Pakistani to score 1500 runs in a calendar year after Babar Azam.

The duo also posted the highest partnership ever for any wicket by any team against India in T20Is, surpassing the previous record of 133 by David Warner and Shane Watson.