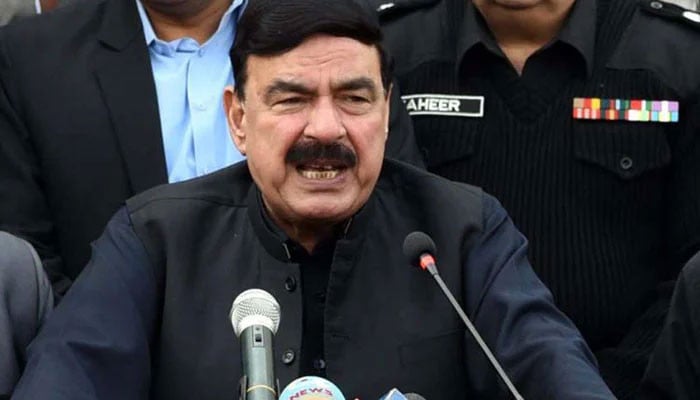 ISLAMABAD: Interior Minister Sheikh Rashid Ahmed on Sunday said that the government’s talks with the leadership of the banned Tehreek-e-Lubaik Pakistan (TLP) were “successful”.

A few days after the protests in Lahore, the banned organization announced on October 21 that it would launch a “long march” towards Islamabad on Friday. A day earlier, Islamabad, Lahore and Rawalpindi were partially closed due to protests.

Talking to reporters, the Home Minister said that all the roads previously closed to stop the protesters from marching towards Islamabad would be gradually reopened to traffic.

TLP protesters will not move forward. [to Islamabad] And will remain in Muridke until Tuesday.

The Home Minister said that after reviewing their demands, the issue would be resolved peacefully by Tuesday.

Giving details of government talks with the TLP leadership, the Home Minister revealed that the government would withdraw the cases registered against TLP workers by Wednesday.

Negotiators of the banned organization will leave for the Interior Ministry on Monday at 10 am. [to hold a second round of talks]Rashid said.

The Minister further said that it was decided that the cases against the persons included in the Fourth Schedule would not be withdrawn.

“I had a one-on-one meeting with Saad Hussain Rizvi,” he said, adding that the government would raise the issue of deportation of the French ambassador in the National Assembly.

Describing TLP activists as “political activists”, the minister said the government did not want clashes with religious groups.

Meanwhile, Minister for Religious Affairs Pir Noor-ul-Haq Qadri said that the issue would be resolved through mutual understanding. Authorities have been instructed not to clash with police and protesters, he said.

A day earlier, Prime Minister Imran Khan had directed the federal and provincial ministers to hold talks with the TLP when they threatened to march towards Islamabad.

On the directive of the Prime Minister, Qadri had reached Lahore from Karachi for talks with the leadership of the banned outfit.

The Prime Minister also directed the Home Minister to return home from the United Arab Emirates, where he had gone to watch the India-Pakistan High Voltage T20 World Cup.

A trench was dug on GT Road to stop the protesters.

On Saturday, the government dug a trench on GT Road near Gujranwala in response to the TLP’s announcement that it would embark on a long march towards Islamabad.

With the help of cranes, a deep and long pit was dug while the roads were already closed with containers. Thus, all routes to and from Gujranwala were closed.

Meanwhile, a procession of the banned organization, whose participants marched from Lahore to Saduk.

The banned group called for a peaceful protest after Friday prayers to demand the release of its leader, Saad Rizvi.

Why was Saad Rizvi arrested?

Rizvi was taken into custody shortly after the federal government declared the TLP a banned organization under anti-terrorism laws and launched a wide-ranging crackdown on the party.

The operation comes after days of violent protests and traffic disruptions in Pakistan’s largest cities, in which public and private property was vandalized by gangs carrying batons and law enforcement officials were arrested. Seemingly removed.

Speaking on the move, Prime Minister Imran Khan had clarified that his government had taken action against the banned TLP because it had “challenged the state’s writ and used violence on the streets, the people and the law.” Attacked enforcers. “