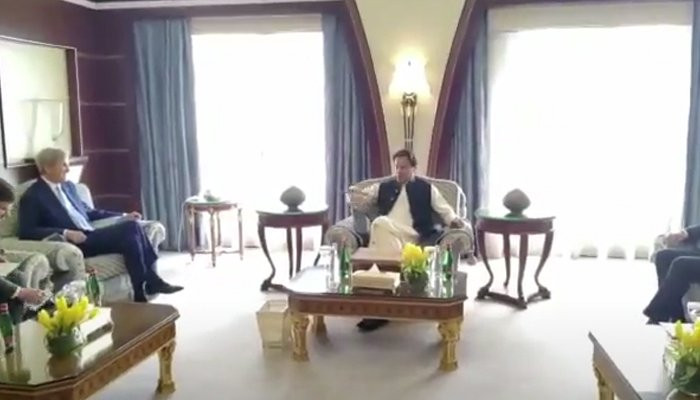 In a meeting with US Ambassador John Kerry, Prime Minister Imran Khan emphasized the need for positive relations with Afghanistan and the release of seized economic resources and financial assets for the well-being of the Afghan people.

Countries have yet to recognize the Taliban-led government, which has been isolated by the international community since Ashraf Ghani took office in mid-August.

During the meeting, the Prime Minister called on the international community to take practical steps to safeguard peace and security, prevent economic collapse and end the humanitarian crisis in Afghanistan.

Prime Minister Imran Khan also stressed the importance of a peaceful and stable Afghanistan for Pakistan and the region.

Kerry, the US special envoy for climate change, and the prime minister spoke at the “Middle East Green Initiative (MGI)” summit in Riyadh.

The Prime Minister is on a three-day visit to Saudi Arabia from October 23 to 25.

Talking about climate change, the Prime Minister stressed the need for national and global emphasis, which he described as an existential threat.

The Prime Minister shared his views with the Special Envoy on the challenges facing Pakistan and other developing countries due to climate change, while urging Islamabad to launch nature-based solutions to address environmental challenges, including the 10 billion Tree Tsunami Project. Experience highlighted.

Reviewing the ongoing cooperation between Pakistan and the United States on climate change and the environment, Prime Minister Imran Khan expressed satisfaction at the recent inaugural meeting of the US-Pakistan Climate and Environment Working Group, which The two sides explored potential areas of bilateral Pak-US cooperation on climate change. the process.

Kerry said that relations between Pakistan and the United States should be further strengthened in the areas of mutual harmony, including climate and environment.

He acknowledged the various steps taken by Pakistan to tackle climate change.

Pakistan is committed to ensuring the security of Saudi Arabia

In addition, addressing the Pakistan-Saudi Arabia Investment Forum, Prime Minister Imran Khan said that Pakistan is committed to ensuring the security of Saudi Arabia, as he wished to further strengthen relations between the two states. Expressed

The Prime Minister said, “The strong ties between the two states are due to the people-to-people contacts.”

The Prime Minister said that Saudi Arabia has always stood by Pakistan in difficult times and Islamabad always remembers its loyal friends.

The Prime Minister emphasized the importance of involving the private sector in strengthening economic ties between the two states.

He hoped that the private sectors of the two countries would take full advantage of the close and cordial bilateral relations to realize the untapped potential in the fields of trade, business and investment.

Highlighting the importance of Pakistan as a gateway to Asian markets and beyond, the Prime Minister emphasized that the geo-strategic position was reserved for Pakistan to encourage intra-regional trade by establishing regional links along modern lines. Provides opportunities.

Stressing on Pakistan’s proximity to the two largest markets, he said that Pakistan has excellent relations with China and further economic benefits if the unresolved dispute of Jammu and Kashmir with India is resolved peacefully. Can be obtained.