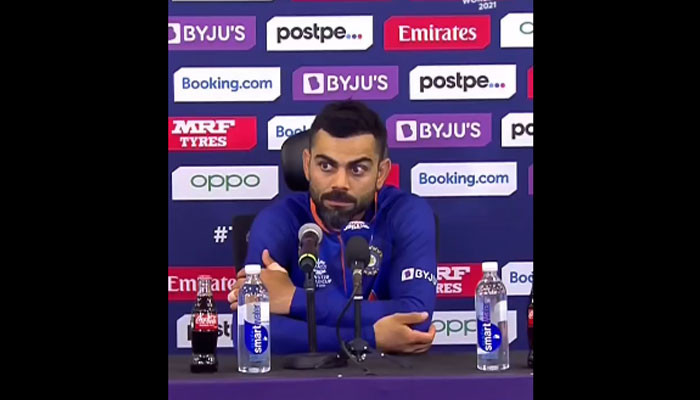 Dubai: After a humiliating defeat to rival Pakistan in the T20 World Cup, Indian captain Virat Kohli was shocked when a reporter asked him a “brave” question during the press after the match in Dubai.

Pakistan defeated India by 10 wickets on Sunday to record their first victory over their rivals in the T20 World Cup.

As Kohli sat for the conference after the match, he was stunned by a reporter who wondered if it was a mistake to include Rohit Sharma in the playing XI.

The reporter asked Kohli if the Indian captain should have dropped Sharma and played left-arm opener Ishan Kishan instead.

An astonishing Kohli called it a “very brave question”.

Will you drop Rohit Sharma from T20 International?

Before asking the next question, Kohli satirized the reporter.

“Sir, if you want a dispute, please let me know first so I can respond accordingly,” he added.

The ICC even tweeted a video from its official account, happy with the reporter’s strange question.

Shaheen Afridi LBWed Sharma in the first over, and dismissed Rahul on the first ball of his second over.

India never got out of the initial setbacks, giving Pakistan a total score of 152 runs to win the blockbuster clash.

In reply, Babar Azam and Rizwan made no mistake, and won the game against the Indian squad.