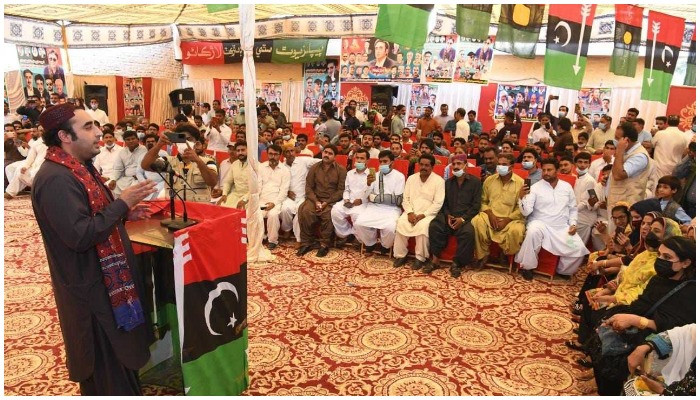 LARKANA: PPP Chairman Bilawal Bhutto Zardari while addressing party workers at a function organized by the PPP in Larkana on Wednesday said that if a no-confidence motion was moved against it in the assemblies, the present government would be formed. Will not be able to stay

A statement issued by the PPP’s media cell quoted Bilawal Bhutto as saying that during the PPP regime, decisions about the country were made by ordinary people.

He said that the workers, farmers and every common man of the country were looking at the PPP at the moment, adding that the party had rescued the people from their misery while the present government was putting them in more trouble.

The PPP chairman announced that he would consider filing a no-confidence motion against other political parties against Prime Minister Imran Khan and Punjab Chief Minister Usman Badar in the National and Punjab Assemblies respectively.

He said that the country has never seen such high inflation in its history as it is seeing today.

Bilawal said that Khan’s policies were creating equal problems for the people and institutions.

Referring to the anti-inflation protests announced by the PPP, Bilawal said that on October 29, people from all walks of life would take to the streets to protest against the “economic assassination” by the federal government.

He appealed to the people to join the protest and said that PPP workers would act as ambassadors of the people.

He said that it was time for the nation to intensify its struggle against injustice.

On the third day of his stay in Larkana, Bilawal along with PPP leaders Nisar Khorro and Sohail Anwar Sial, Syed Sardar Shah, Khurshid Junejo and others visited the houses of party workers.

PPP will protest across Sindh against inflation.

On Monday, the PPP announced to hold protests across Sindh on October 29 against the extraordinary rise in prices of essential commodities across the country.

A statement quoting PPP Sindh president Nisar Ahmad Khorro said that protests would be held in every district of the province after Friday prayers. He added that a large number of party MNAs, MPAs, senators, officials, workers and supporters would participate in the protests.