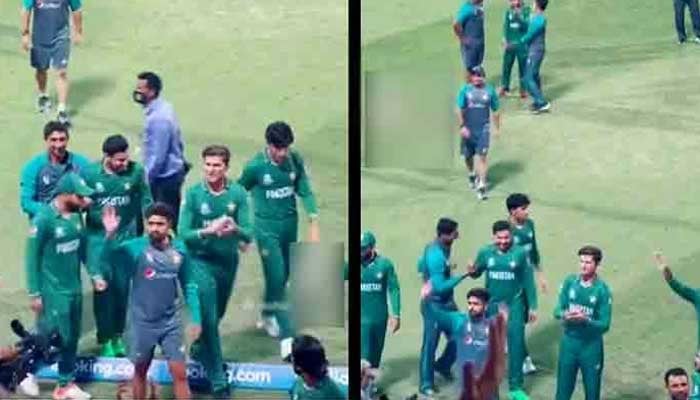 A video clip of Pakistan cricket team captain Babar Azam circulating on the internet in which he can be seen appealing to the Sharjah crowd not to make fun of the New Zealand cricket team.

In the video made after the Pakistan cricket team defeated New Zealand by five wickets, Babar Azam and other cricketers can be seen walking towards the dressing room, acknowledging the fans.

The video shows spectators shouting “Security, security” as the players approached the crowd to acknowledge their support. Shadab Khan, who can be seen applauding and smiling at the fans, suddenly moved towards the crowd with both hands, urging them to stop chanting slogans.

Captain Babar Azam, who can be seen talking to Shaheen Afridi, also turns around and gestures with one hand to stop taunting the crowd with black caps.

Hassan Ali, interestingly, can be seen inciting the crowd to shout even louder.

The gestures of both the cricketers made him more popular with netizens.

“This Pakistani team has nailed something healthy and professional.

Subhaniya found it funny how Hassan Ali was promoting the crowd.

“Hassan Ali is raising the crowd,” he tweeted with some emotional gestures.

Raj S tweeted, “With each passing day, we are becoming fans of this team.

Qardash tagged the black caps on Twitter and urged them to watch the Pakistani team’s sportsmanship.

“It shows that he is not only a great cricketer but also a great man … Respect,” tweeted another account called Positive Vibes.

“I have a heart in this team. Such a class,” Malko wrote with a heart emoji.

Shaheer Bhatti liked what the team did. He also liked what Hassan Ali did.

Me too: No, I will do what Hassan Ali did, “he tweeted.

After restricting New Zealand to 134 runs in 20 overs, Pakistan successfully chased down the target at a loss of five wickets.