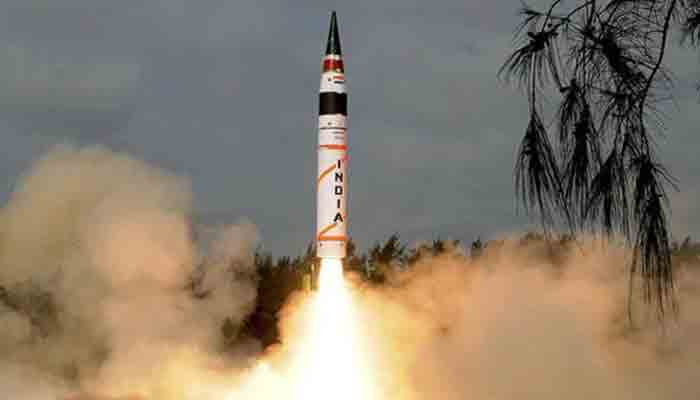 New Delhi: India has tested a ballistic missile capable of carrying a nuclear warhead with a range of 5,000 km (3,100 miles), the defense ministry said, in which the media called China a “strong signal” because the two borders Are locked in conflict.

The Agni-5 missile took off late Wednesday from the Indian coast of Abdul Kalam and landed in the Bay of Bengal.

“Successful experience … is in line with India’s stated policy of ‘reliable minimum deterrence’ which strengthens the commitment not to ‘use first’. [of nuclear weapons]”It simply came to our notice then.

The 17-meter-long missile has been tested several times before, but not at night, and local media say the timing was intended to send a signal to Beijing.

Tensions with China have been rising since June 2020, when 20 Indian soldiers were killed in clashes on the disputed Himalayan border.

Nuclear-armed neighbors have since strengthened the border with tens of thousands of additional troops.

India has deepened defense cooperation with Western countries in recent years, including quad alliances with the United States, Japan and Australia.

New Delhi is also a major buyer of Russian military hardware, ordering Moscow’s S-400 missile defense system despite the threat of US sanctions on a 5.4 billion deal.

The Financial Times reported this month that China had tested a hypersonic missile that orbited the Earth in low orbit before landing at its target, but disappeared.

Beijing denied the report, insisting it was a routine test of a reusable spacecraft.

Hypersonics are new frontiers in missile technology, as they fly low and are harder to detect than ballistic missiles, can reach targets more quickly, and are more manageable.

The United States, Russia, China and North Korea have all tested hypersonic missiles and are developing several other technologies – including India.

According to the Times of India, New Delhi is working to enable the Agni 5 to carry multiple nuclear warheads simultaneously so that it can hit different targets separately.